I could boycott the Olympics, but I don’t think the Chinese would notice. At least it is now safe to watch on New Zealand television again, with the Bowzer of the TVNZ sports department finally out of our living rooms.

The last Olympics I actually cared about were those in Munich in 1972, before I was old enough to realise that politics and sport are always intertwined, no matter what sports administrators claim. (Recent example: the IRB saying that New Zealand shouldn’t host the rugby world cup, as that will only be preaching to the converted rather than evangelising the cult to new territories.)

But the Black September terrorists changed that, and the compelling documentary One Day in September brilliantly shows how the world suddenly lost any vestiges of post-war naiveté. Then the tit-for-tat Olympic boycotts started, and the IOC greed became even more vulgar – which is saying something after the dictatorial dominance of IOC head Avery Brundage - and it all seemed like a giant propaganda exercise. So I thought I’d do some homework, and watching the 1993 documentary The Wonderful, Horrible Life of Leni Riefenstahl seemed a good place to start. Because one thing these Olympics will have in common with those in Berlin of 1936 is that they will be spectacularly visual. China is a nation whose art direction knows no bounds: even Cecil B DeMille wouldn’t have tried to alter the actual atmosphere to get a better shot. The 1984 Olympics in Los Angeles missed a grand opportunity, even with the sensibility of an actor in the White House; all I remember is Stevie Wonder at the nadir of his career, closing the show.

Riefenstahl was 91 when the documentary was made: feisty, defensive, and as unpleasant as a witch-like version of Winston Peters. She was still in denial about the political motives behind her film-making, claiming that she was just an artist, and besides, she believed in the rise of Hitler because he promised peace and security. But her film-making is still breathtaking, be it in the Tyrol mountains or her balletic, slow-mo shots of high-divers.

During this year’s Olympic torch relay fiasco, many people made the point that it was all a Nazi construct invented for the 1936 Olympics, rather than something that dated back to Greece. At that point no links had been made with Riefenstahl’s Olympia but I’m sure they’ll come thick and fast after a billion flags get waved in unison later this week. (Riefenstahl claimed that Hitler wasn’t behind her film, in fact he wasn’t even into the Olympics at all, as it meant that other nations would have to be portrayed as being occasionally victorious over the master race.) 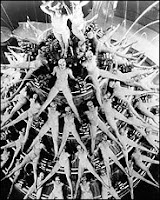 Years ago Susan Sontag – writing of Riefenstahl’s “fascist aesthetics” – made a connection that rings true: how the German director’s work paralleled that of Busby Berkeley, working at the same time over in Hollywood on his mad, epic musicals. As Dave Kehr, reviewing Riefenstahl’s Triumph of the Will – about the Nazis’ Nuremburg rallies – summarised,

Berkeley’s abstract musical numbers, with their own geometric patterns and tendency to absorb individuals into standardized, idealized groups, seem to apply the characteristics Sontag listed in her essay “Fascinating Fascism”: situations of control, submissive behaviour, endurance of pain, domination through pageantry, turning people into things, multiplications and “orgiastic transactions between mighty forces and their puppets.” Rather than smartly tailored military uniforms, Berkeley placed his performers in scanty costumes that emphasized the symmetry of legs and bosoms; the uniform platinum wigs that many of his chorines wore invite comparison with the caps and helmets of Hitler’s massed forces at the Nuremberg rallies filmed by Riefenstahl in 1934 (filmed one year after Berkeley’s best film for Warner Brothers, Footlight Parade).

Yesterday in his New Yorker blog, George Packer made a different connection between Berlin and Beijing. He is currently reading Victor Klemperer’s I Shall Bear Witness, the diaries of a Jewish academic living in Dresden during the rise of the Nazis. The New Yorker excerpted these 10 years ago, in its 27 April 1998 issue, and it was deeply moving because of its very mundanity. Day by day, bit by bit, another element of human rights was withdrawn for Jews. For me, the most unforgettable image was the moment when Klemperer, elderly and starving, spotted a tiny piece of salami that had been left on a table. Just as he reached out to pick it up and eat it, a cat leapt up and got there first. (Later, the Nazis decreed that all pets belonging to Jews had to be put down: not given away, put down.)

I find the Olympics so odious because they are not about sport—in this country, I mean—but are an entirely political enterprise. “German renaissance through Hitler,” I read recently. It’s constantly being drummed into the country and into foreigners that here one is witnessing the revival, the flowering, the new spirit, the unity, steadfastness, and magnificence, pacific too, of course, spirit of the Third Reich, which lovingly embraces the whole world. The chanted slogans on the streets have been banned (for the duration of the Olympics), Jew-baiting, bellicose sentiments, everything offensive has disappeared from the papers until August 16, and the swastika flags are hanging everywhere day and night until then too.

Packer emphasises that he’s not equating the Chinese with the Nazis, he is making the point that the IOC’s decision to award them the Olympics is a reminder that it’s all politics, and that the Chinese leadership want it both ways: quick to criticise others for commenting on their sovereign affairs, while “eager to cash in on all the geo-political benefits that the Olympics will bring. China didn’t even bother to abstain last month but instead vetoed sanctions against Robert Mugabe at the U.N. Unlike Germany in 1936, China is prettifying its streets without pretending to prettify its foreign policy.”

If you can’t stomach The Wonderful, Horrible Life of Leni Riefenstahl there are plenty of excerpts of her work on YouTube, or this insightful obit from the New York Times. At 180 minutes, Horrible Life includes a lot of Aryan posturing and self-denial, but it’s still well short of the 220 minutes of the original Olympia. And probably the opening and closing ceremonies of the 2008 Beijing Olympics.

Maybe this is a bit off topic Chris but I learned the other day that Hitler's favourite film - notwithstanding Leni's opus - was ... King Kong.