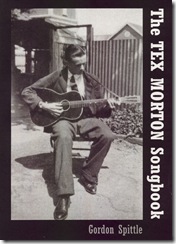 Tex Morton had more lives than a cat, and was about as cunning. You couldn't make it up: the godfather of country music in New Zealand and Australia was also a sharp-shooter and hypnotist, and would combine all three skills in his stage shows. Born Robert Lane in Nelson, he wandered the backroads of New Zealand in the early 1930s - finding his name on the side of a shed in Waihi - before shifting to Australia. He became a hobo and busker who reached Darwin before getting in trouble with the law. During his decade in the US, he befriended Errol Flynn and Gene Autry, went on tour with Hank Williams and got a PhD (possibly mail-order). Gordon Spittle has been researching the life of Tex for years, and has just published the results in The Tex Morton Songbook. It's actually more biography than songbook, with splendid archive photos that capture - along with the wry, colourful text - what a rich life Morton led. You can read the Dictionary of New Zealand Biography entry on Morton, and order The Tex Morton Songbook here. While there grab a copy of Spittle's 1997 book Counting the Beat: the stories behind New Zealand's most loved popular songs, going from 'On the Ball' all the way to the Muttonbirds. It even includes the chord charts. It's one of the best written and useful books on New Zealand music.

A friend wrote this week to tell me of the death in May of Lew Campbell, one of New Zealand's most respected jazz musicians. A trumpeter and pianist, he was the kind of unsung hero that remained beneath the radar, probably because he was based in Sydney since the early 1960s. Campbell was one of three Maori brothers from Paeroa who were regarded with awe by their peers and audiences. Phil, the oldest, was regarded as the finest jazz trumpeter we ever produced, and George, a double-bass player, is probably best known for his part in the famous 'Geddes the Dentist' advert. Both George and Lew played behind Dizzy Gillespie when he came to New Zealand in the early 1960s, not a happy experience as there were no real rehearsals and no charts. All three Campbells were in the band of the Kiwi Concert Party, a stellar outfit that entertained the frontline troops in World War II, but tragically Phil was killed by a German shell in Italy towards the end of the war. Afterwards, Lew played in and wrote arrangements for radio bands, on tour with international visitors and in cabarets; he was briefly in the NZSO and spent more than two decades teaching at the Sydney Conservatorium. George and Lew Campbell were profiled, along with other 1950s Maori musicians in Auckland, in an evocative piece by John Berry in the January 1959 Te Ao Hou. (This photo is from there; every issue of Te Ao Hou has been put on-line by the National Library).

Auckland, 1 October - MP George Hawkins has a bruised hand after fending off a large Bible which was hurled at him by a man in the audience at a church-run election meeting on Sunday night. The incident shocked about 160 people at the meet-the-candidates event organised by Manurewa Baptist Church. A local man in his 60s was quickly wrestled off the stage by two church members, who escorted him outside ... Mr Hawkins said his assailant's Bible was an 1860s edition and weighed 5kg.

Years ago, my mother gave me a bullet...a bullet, and I put it in my breast pocket. Two years after that, I was walking down the street, when a berserk evangelist heaved a Gideon bible out a hotel room window, hitting me in the chest. That Bible would have gone through my heart if it wasn't for the bullet.

This week between 60 and 70 jobs were cut from the Sydney Morning Herald and the Melbourne Age, many of them sub-editors due to the new fashion for out-sourcing. Recently Evolving Newsroom's Julie Starr linked to a "survival guide for sub-editors," originally in the Telegraph. It's full of smart ideas of how to keep the role relevant and your job necessary in the e-news era. Coincidentally a well-known US daily comic strip is dealing with this issue right now, and the lost, betrayed look of the senior journalist made redundant while banalities bombard him is very believable. You can subscribe to this and many other daily comic-strips through your email using the free ArcaMax service; it comes in handy when your local paper doesn't carry a personal favourite. Speaking of beleaguered subs, the punch-drunk look of these subs down in the bunker hiding from Giles Coren also rings true.

Who would have thought: Sha Na Na re-wrote history. I hadn't thought about the late-60s doo-wop parodists for, oh, several decades until a certain broadcaster turned up talking sport with his mouth open. Then a friend sent me this recent think-piece from the Columbia University alumnae mag: "Sha Na Na and the Invention of the Fifties". The group were students from Columbia who just happened to get their act together in time for the Woodstock festival. But wait, there's more: Sha Na Na were actually "meta-historians, theoreticians of cultural history itself". Who would have thought? (Certainly it took the pointy-headed ex-Sha Na Na member who wrote the essay by surprise.) Before them, it was referred to as "the haunted 50s", all McCarthyism and grey-flannel-suits. After them, American Graffiti and Happy Days. Eric Hobsbawm named the concept "the invention of tradition" - it says here - and apparently the Scottish kilt was invented by a fellow who just wanted to sell tartans, and Sir Walter Scott was his ad-man. Next thing they'll be telling me Santa Claus was invented by Coca-Cola.

Sha Na Na may have appropriated the word 'grease', but as for the rest of that article and 50s imagery:

As for the conservative Republican angle: