Gospel According to Keith

Keith Richards may never have to carry his belongings round in a supermarket bag, but he often talks like one who does. Until, that is, his bon mots - so often reminiscent of the last drunk at a party - are translated for you. The world thanks Jessica Pallington West, the codebreaker behind What Would Keith Richards Do? Daily Affirmations from a Rock'n'Roll Survivor. Here, then, is what she calls "the Tao of Keith": 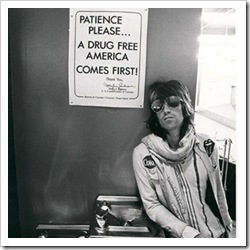 Keith the historian: “That Adolf. What a piece of work.”

Keith the fantasist: “I’ve never turned blue in someone else’s bathroom. I consider that the height of bad manners.”

Keith the athlete: “When I was a junkie I used to be able to play tennis with Mick, go to the toilet for a quick fix and still beat him.”

Keith the scientist: “I looked upon myself as a laboratory.”

Keith the film critic (on Godard): “He was out of his depth in England. Like William the Conqueror.”

Keith the music critic (on the Beatles): “They were exactly what was needed. It was a great enema.”

Keith the fashionista: “I reckon our style came direct from the Three Stooges.”

Keith the contemplative: “Mine is a very nebulous spirituality.”

Keith the metaphysician: “It seems strange that we do the same thing with the same boys all these years later. But it’s like when you get drunk at a bar and wonder later how you got home. You know where you are — you’re home — but how did you get there? That’s the mystery.”

Addendum: by chance I came across this quote, that says more than any of the above ...

Keith the multi-tasker: “While I was a junkie, I learned to ski and I made Exile on Main Street.”

... and Phil K sends a link to a new Guardian interview in which he actually talks sense about music ...

But I think that photo, my favourite of Keef, has been cropped - from (admittedly addled) memory he is leaning on a Coke vending machine.

You're right, checking the photographer Ethan Russell's website it was more vertical (and a print costs $US800). But he's leaning on a water cooler. The only Coke visible is on his jacket.

LOVE this stuff from Keith! I swear, the guy is going to go down in history as a highly quotable character...he's so unique and so full of wisdom...and piss and vinegar! thanks for posting!