From the back pages, for the 70th birthday this week: a 1991 reconsideration after the often desultory 1980s. (from Rip It Up) 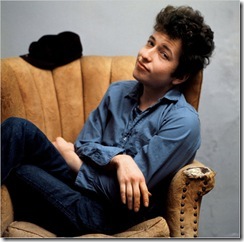 IT HAS often been said that Bob Dylan is a man of many masks. After this year’s bizarre Grammy performance, many must have thought, who was that masked man? In the 80s, Dylan devotees became Dylan apologists - for his lazy recordings, his perfunctory performances, his lousy voice and, of course, his flirtation with Christianity. New generations, con­fronted with this legend who didn't have the grace to die dramatically, or at least fade away, wondered what all the fuss was about. The Bootleg Series answers all their questions. It strips away the masks and re-establishes his credibility.

In the arts of the 20th century there are only a few people whose stature compares with Bob Dylan. I can think of only four: James Brown, Miles Davis, Picasso and Stravinsky. All astounded their peers with their precocious talent and their early mastery of classic forms. All were provocative, caused riots even. All never stood still, kept changing their styles throughout lengthy careers and yet were always at the cutting edge of what­ever form they chose. And none of them were wunderkind: all fulfilled their early promise.

On The Bootleg Series, over 50 unreleased tracks, Bob Dylan stands naked. The recordings range from an early session in a New York hotel room to a slick Oh Mercy out-take. They follow all the stylistic shifts in his career, and collect many of the rarities Dylanologists have been reverently swap­ping for decades. Coffee bar folk nights; publishing demos; the unreleased live album from ’64; sessions with the Band, the Rolling Thunder Revue; George Harrison (pictured below, at Woodstock, 1968); the Muscle Shoals crew; rehearsals, out-takes and leftovers from all the albums. It gives box-set archaeology a good name, not only because it re-assesses Dylan's career but because it is richly rewarding listening for its own sake. 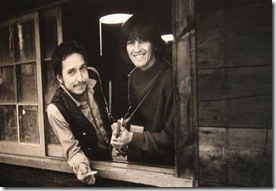 Millions of words have been written about Dylan's way with words. And certain­ly, he deserved the adulation. Before he was anywhere near 25 he'd coined dozens of phrases that had entered the colloquial vocabulary. But there are so many unac­knowledged facets to Dylan's talent. It's easy to forget just how funny he can be, in the early talking blues and shaggy dog sto­ries, the apocalyptic nightmares and even the harrowing sagas from Blood on the Tracks or the chilling Old Testament sce­narios. His comic liming is pure Charlie Chaplin by way of Woody Guthrie. Even in a song like the tortured ‘Idiot Wind’: “They say I shot a man named Gray, look his wife to It-ill-ay / She inherited a million bucks, and when she died it came to me / I can’t help it ... if I'm luck-y”.

Take a verse out of any of the classic songs and it encapsulates all his talents. Besides his humour, there's his melodic sense: as hook-filled as Lennon-McCartney's but more creative with it. Add to that the passion and personality of his singing, which often recalls Hank Williams or Robert Johnson, plus his idiosyncratic use of metre and phrasing - and you've got a ground-breaking artist to stand beside Charlie Parker. Many of his songs are capa­ble of becoming standards for all to inter­pret, though some work for Dylan alone.

Dylan has often been criticised for his casualness in the studio, but that's a mixture of his perverse need for unpredictability and his old folkie attitude that every perfor­mance is a fresh statement. This interpreta­tion is the core of Paul Williams’s analysis of Dylan's early work, Performing Artist (Underwood Miller, 1991), an entertaining rave full of coherent insights.

But throwing caution to the wind is what rock’n’roll has always been about. Dylan's carefree attitude to recording has given us many of rock's most incendiary moments. He heard the Animals obliterate his version of "Rising Sun", then hired the best musi­cians he could, told them to turn it up - and let it rip. The resulting noise brought a sar­donic literacy to rock that made Chuck Berry and Smokey Robinson's adept pen­manship look effete. It was a dandy's blues stomped out with Cuban heels; Ferlinghetti through a Fender Twin Reverb on 10.

The last time I got excited listen­ing to Dylan, he was still an agnos­tic. But it wasn't turning Christian that put me off – no one had been born again like Dylan since St Paul, no glazed eyes and beatific grin for this iconoclast – although the hec­toring damnation had a muddled concept of evil. Besides, I grew up on Mahalia, and Dylan had always used the Bible when it suited. Could anyone else have kick-started a song, “God said to Abraham, kill me your son / Abe said man, you must be putting me on / God said no, Abe said what? Where you want this killing done? / God said out on Highway... 61!”

No, it was the voice itself that lost me: many of the songs still have the edge. But his unique instrument, that inimitable, mal­leable whine had become a ragged wreck, ravaged after years of abuse. Untrained singing takes its toll, combined with smok­ing, alcohol, whatever else plus the Never-ending Tour.

Of the three discs, it’s the middle period that I keep going back to, from the early electric years, when you can hear Dylan re­inventing rock’n’roll on the spot, through to the blistering self-exposure of Blood on the Tracks. But there's something in this set from every period to stimulate a re­appraisal, be it for unreconstructed Guthrie-ites or latter day Infidels. So here's a docu­ment for those one enthralled by Dylan who later became bored. Maybe a bit much for the uninitiated – for them, any of the dozen seminal albums, or the Biograph set, would be preferable – but not only for closet Dylanologists either. After all, it’s brought it all back home for this doubting thomas.