From New Zealand to New Orleans: the Moahunters and the Neville Brothers 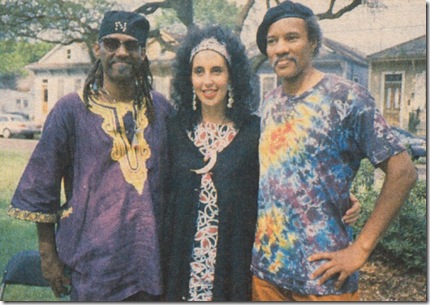 Moana Maniapoto with Cyril, left, and Charles Neville; Napoleon Avenue, New Orleans. Photo: Chris Bourke
NEW ORLEANS, April, 1992 – “I’ll give you a quote for your magazine.” Cyril Neville puts his arm around me. He has a broad grin on his face, which is framed in dreadlocks. He’s dressed in a purple robe, with a cap encrusted in sequins to read “N”.
“Why isn’t more Maori music played on the radio in New Zealand?”

The rest of this article can be read at AudioCulture.


___________
First published in Rip It Up, June 1992. Looking back 20 years later, that Moahunters trip was trail-blazing. While Maori pop is still hardly heard on mainstream radio, so much else has changed: support from the New Zealand audience and funding bodies, and thinking global. Moana has had a very successful career taking her unique music around the world, as have Te Vaka. A couple of years later, the Proud compilation testified to the wealth of contemporary pop coming out of South Auckland (and Once Were Warriors filled cinemas). In 1996, ‘How Bizarre’ broke Polynesian pop worldwide. Simon Lynch’s compilation Rare Kiwi Soul from the Eighties (Rajon) goes back a decade to recall the musicianship present in South Auckland funk clubs such as Cleopatra’s (on Morrin Road, Panmure). The most prominent – and original – band to emerge from this scene was Ardijah, for whom Lynch played keyboards before founding D-Faction and other outfits.
Posted by Chris Bourke at 11:59 AM