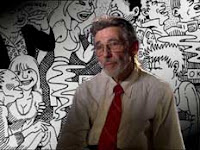 I had heard murmurings of legendary comic artist Barry Linton's magnum opus - a science fiction epic, apparently - so it was good to read of progress, and an explanation, in the latest Listener (27 Sept). It's called Lucky Aki in the New Stone Age, and excerpts will first appear in a Christchurch art gallery. It isn't science fiction, but a "fictional prehistoric geography in which to explore humanity's (and his own) search for understanding the world," beginning 5500 years ago in what became Iraq. Comic historian Tim Bollinger's warm tribute to Linton mentions the sense of place that has always been apparent in Linton's work, especially its portrayal of a Pacific Auckland, and a gritty Ponsonby before it was gentrified. Dylan Horrocks has often championed Linton, who is regarded as a godfather of graphic story-telling by the comix community. He's a national treasure who should get one of those Icon medals, and some cash. Meanwhile, it's worth seeking out the most autobiographical strip that Linton has ever done, in Landfall #180 (December 1991). It's the centrepiece of a special Hamilton issue, guest edited by Alan Brunton, in which Linton looks with humour and wistfulness at his 1950s and 60s Waikato childhood. Horrocks has written his own profile of Linton - graphically, of course, in the anthology Look This Way: New Zealand Writers on New Zealand Artists. (The exhibition is at the Centre for Contemporary Art, Christchurch, until October 12.)

2. Channel Surfing
I am on a D-Day kick. It started with The Big Show, Alison Parr's collection of oral histories of New Zealanders involved in the invasion of Normandy on 6 June 1944. That these are the war stories our fathers never told us goes without saying - they never did - but there is another reason. New Zealand soldiers weren't involved in D-Day: they were too busy in Italy and the Pacific. But here we have first-hand accounts from New Zealand airmen and sailors: farm boys who became pilots dropping parachutists to almost certain death, a radar engineer stranded on the dreaded Omaha Beach, a bomber who survived the Dambusters raid now miles from the action, precisely dropping tinfoil as a diversion. To a man, they are deeply moving. Because they're not men: they're all about 21. To be so young, and watch the doors of the landing craft open, and your peers dive straight into an onslaught ... Parr edits the interviews expertly - some will have required a lot of work to make them flow - and as she says, print cannot convey the emotion of hearing the voices. The stuttering, the pauses. (Related web feature with interview transcripts and audio here.)

3. Dawn Chorus
The next port of call of course was not Saving Private Ryan or The Longest Day, but The World at War, which I re-watched five years ago for the first time since its original screening here in 1974. The fact New Zealand had only one TV channel, and no videos, weren't the only reasons the nation stopped and watched together. This compelling series is still the ultimate example of documentary making, letting the pictures do most of the talking, Larry Olivier providing context in his sparse narration (he made suggestions when he should shut up, though there is the odd camp moment when he should have). The D-Day episode is called Morning and it starts with a shot of an empty Normandy beach, with archival audio from Winston Churchill. He is speaking to the French people in 1940, post-Dunkirk, promising they will be back: "Goodnight then: sleep to gather strength for the morning. For the morning will come." The World at War should be re-run every few years on taxpayer television, but meanwhile it is available cheaply as a boxset from overseas suppliers, with lots of episodes we never saw. Watching it again was another reminder of the travesty that was the mid-1990s series New Zealanders at War: ignorant and sensationalist, even for the arrogant larrikin producer/director Neil Roberts. I hope they kept all the raw interview footage so someone can do a decent job with it one day; the interviewees are almost all gone now. 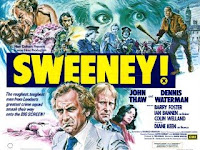 4. You're Nicked
Staying with the 1970s golden age of television, I was given an episode of The Sweeney. Cultural gatekeepers may be namechecking The Wire, which is indeed excellent: Sopranos without the humour, Deadwood without the swearing, and less violence than both, just credible character and scripts. But what a delight to see John Thaw and Dennis Waterman taking on the crims of the dirty old town in a hotted-up Austin Allegro; the big collars, bad rugs, East End chancers and posh totty. This era has been recently revisited by Roger Donaldson in his entertaining caper flick, The Bank Job. But today I was reading the obit of Harry Challenor, who sounded like a real-life version of Thaw's character, Jack Regan. Challenor was a wartime SAS hero later nicked for being a corrupt cop in Soho (planting evidence). Being a paranoid schizophrenic seems to have had something to do with his courage, and his poor decisions. "I accept I'm mad," he once said. I don't say mentally ill, that's a bloody silly expression. I'm mad and I get on with it."

5. Give the Drummer Some
When a lightbulb blows, you always know that a bunch more will expire within a few days. It's odd, this roll call of R&B legends that have died recently, it's like their batteries just ran out. Two more last week: Norman Whitfield, who wrote 'Papa Was a Rolling Stone' and 'I Heard it Through the Grapevine', and Earl Palmer, the engine room of R&B. Palmer was the drummer on all the early hits that came out of New Orleans, and helped turn R&B into rock'n'roll. His biography was apparently disappointing, but it had the perfect title, Backbeat. He played on 'Tutti Frutti', 'Tipitina', 'Long Tall Sally', 'Lawdy Miss Clawdy', 'I'm Walkin' and countless others. After moving to LA - like many New Orleans musicians, after Harry Connick's dad closed down the clubs - he became a top session drummer, with 'You've Lost that Lovin' Feeling' among his many contributions. His specialty was the shuffle, a primal rhythm that is deceptively difficult to play. The best place to read about him is in The Big Beat, Max Weinberg's fascinating collection of interviews with top drummers. I saw Palmer play once, an old man in a tuxedo, dominating a room full of legends. Also present at the 1994 gig, in an old theatre on Canal Street, was a stunning R&B pianist from the 1950s, Edward Frank. Allen Toussaint put his arm round Frank's shoulders and said, "this is the pianist we all looked up to." He was still playing boogie brilliantly, like four hands taking on 88 keys. The extraordinary thing was, even in his 1950s heyday, Frank was paralysed and could only play with one hand.