It's my birthday too, yeah 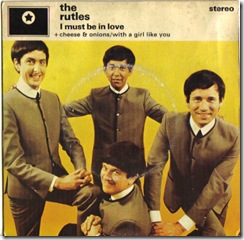 It was a special moment when two guests I had booked for a radio programme met in the green room. One was Neil Innes, of Rutles and Bonzo Dog Doo Dah Band fame, and Python first cousin. The other was Noel Crombie, who helped put Python into Split Enz, and a man not untouched by the Bonzos. Both men wear their dada-ism lightly and are wry, no-fuss gentlemen whose success never quite managed to reach the polluting level of real fame. After his interview Innes was happy to sit and chat, even about his recently deceased close friend George Harrison (especially his love of gardening).

It's been the 40th anniversary of the Beatles' "White Album" this week, and while the flurry of coverage didn't bring any new insights, just thinking about it is almost synaesthetic. It was the third record I ever owned, and when I received it for my birthday I was so musically naive that it was like learning to read and then being given the Shorter Oxford Dictionary and being told, have fun. Now that music and popular culture is inescapable it's hard to fathom, but it was 18 months before I got another record, so it was just as well it is such a rich album. It can take you in any number of directions from Chuck Berry to Noel Coward to Stockhausen to  Bert Jansch, country, reggae, white blues ... and then there's 'Happiness is a Warm Gun'.

But I've just realised that it's the 30th anniversary of the Rutles' film All You Need Is Cash. When it was first shown in 1978, it was before videos, but so perfect was it as a parody that one instantly knew the best lines forever (without becoming a Python parrot-reciting bore, promise). From the start in New Orleans, meeting an old bluesman ("He's lyin!" says Blind Lemon Peel's wife. "Last week he said he started the Everly Brothers!") to their first manager's mother explaining what her dead son saw in the band ("It was the trousers ... they were ... tight") to their demise with the Let It Rot project ("released as a film, an album and a lawsuit") and their brutish last manager Allen Decline ("a man whose right hand never knew who his left hand was doing"), it was brilliant and unforgettable.

When I met Derek Taylor a few years later - he is parodied as Eric Manchester, and played by George Harrison - he was happier to talk Rutles than Beatles. They were probably more interesting to him by that stage and, besides, he was a director of Rutland Weekend Television. But he was too discreet to mention the then-unknown dark side of the Rutles: Neil Innes was sued for plagiarism of the Beatles' songs by ATV, who then owned Northern Songs (before selling the catalogue to Michael Jackson). This had nothing to do with the Beatles, who had to sell Northern to split up the band, and were actually great friends of Innes and the other Rutles. Harrison saw Python as the Beatles' true successors and one day Innes went around to visit Harrison at his home. Ringo was there, and they greeted Innes with a chorus of 'Ouch!' - the Rutles' parody of 'Help!'. Harrison also helped get the Rutles' film made and - so I read in the December issue of The Word - Lennon was also a fan, even warning Innes that 'Get Up And Go' in the rooftop scene was 'a bit close'. No, this was between lawyers not musicians, and ATV had more cash for lawsuits, so Innes settled by signing over 50 percent of his royalties and relinquishing the right to put his name in the credits. Ironically the Rutles were hugely influential in their own right: without them, no tribute-band industry, and no songs by Oasis, which are like the Rutles devoid of wit, intelligence or much melody. Liam Gallagher thought the Rutles were a real band: is that because the concept was so clever, or he is so fick?

Hi Chris
As you know, I am a latecomer to Beatles idolatry and have just caught up with The White Album big time. No, not just to get Ob-La-Di, Ob-La-Da on to my treadmill tapes, but also to try and get the Blackbird worm out of my head -- unsuccessfully. I took the album to town, literally, launching my food memoirs The Communion 0f the Easter Bun-Rabbit (ref Beattie blog of launch) by offering a free copy to the person who could identify most food references in the said album. With the help of Professor Michael Patrick O'Leary of the Oceania Inistitute of Contemporary Beatles Conceptualisation, I identified seven, but one of the audience claimed 8, without substantiating his claim. Check it out. David