The Dominion Post's official curmudgeon Karl Du Fresne recently wrote an impassioned post about the decline of the New Zealand accent. Apparently it is happening very quickly - too fast - and being driven mostly by young women. A few years ago TVNZ made one of those cheap, quickie compilation programmes looking at "The 80s". The most surprising thing about it was the over-elocuted way of speaking used by our public broadcasters such a short time ago. They sounded like aliens from another planet, their speech completely at odds with the population at the time. Much of what Du Fresne says is hard to argue with - TV sports broadcasters in particular make me grimace - but I have a problem with the phrase "misguided egalitarianism". I think I prefer that to the spurious elitism conveyed by those of a previous generation, often from the so-called "better schools". As Du Fresne and I both attended the same Dickensian asylum, 10 years apart, there is no class struggle in my comments. But the argument that broadcasters should reflect their community has been kicked around for a while, as this 1954 piece from Truth shows. It was written just after the first QE2 roadshow; obviously there weren't too many Irish accents on air back then.

This last comment [Truth continues] is usually based upon the choice of YA announcers' accents (all emphatically, but not always authentic, BBC). The BBC is a well-regarded institution in New Zealand and, as it has already demonstrated most convincingly during the Coronation, it records and describes British national spectacles most convincingly.
Critics of NBS announcing accents want to know why more typically New Zealand voices cannot be used when the setting of the spectacle is in New Zealand. The typical New Zealand voice - if there is such a thing - is most definitely not that of most YA announcers.
If the pronounced New Zealand accent does not come well over the air, there are many varieties of it that do.
Another criticism is that too many ecstatic adjective were used by some of the NBS announcers. There is no doubt whatever about the enthusiasm of New Zealand crowds and their admiration for her Majesty and the Duke.
Critics think that fewer adjectives and a more factual description of the scenes of enthusiasm would have emphasised this point instead of conveying a faint suggestion of being forced and overdone.
For instance, it is argued, the best way to demonstrate the enthusiasm of a crowd is not merely to keep on repeating that it is enthusiastic in tones of mounting frenzy, but to describe some of the examples immediately in front of the observer.
This is a recognised BBC technique and the NBS could copy this, possibly with more effect than by copying the BBC accent.
But, on the whole, the consensus of opinion is that the NBS is doing well, if according to an orthodox pattern. 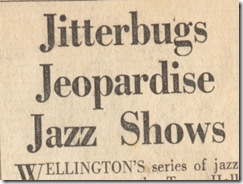 A three-day jazz festival in Wellington next March offers a very approachable but credible line-up, with recent stars the Brad Mehldau Quartet and the acclaimed 14-piece Mingus Big Band from New York, along with bluesmen Otis Taylor and Eric Bibb, vibraphonist Roy Ayers, and some chap called Tomasz Stanko, who is known as the Polish Miles Davis.
It seemed odd that they are billing this as Wellington's inaugural jazz festival, after the very successful 11-year run of the Wellington International Jazz Festival (I can understand they are unaware of the groundbreaking 1950s jazz festivals). What's in a word? Meanwhile, this crossed my desk, from Wellington's Evening Post in 1966:


The wail of a sad blue note would be the true Wellington jazzman's reply to thoughts on the tenor of the trade here today.
The city's sound of '66 is the roaring whang of the hirsute breed in their Carnaby-offshoot clothing. Gear that's fab, mod, and the electronic oomph hold domination of the scene.
Jazz, or what there is of it, has been driven off Main Street. It has slipped itself into the coffee-and-cream costume for the candle-lit environs of the wine and dine, where white-cloaked waiters hover in the background ...
True jazz, then, in the Capital is currently down. But it's not out. It will come again. This is the way it has always been, for Wellington jazz is one long chapter of rise and decline.