Fix it in the mix

Alongside the 1988 Tex Pistol profile in Rip It Up was a story describing the production of a television jingle. At the time the Fairlight synthesiser was cutting-edge technology for sampling music. It enabled the sampling of real instruments, which could then be played using the piano keyboard. From memory, they cost around $150,000 NZD and could record 16 polyphonic voices, and a sample length of about two minutes. Its competitor the Emulator was cheaper and simpler, but its samples were only 30 seconds long. Ian Morris enjoyed making music for advertising – his showreel is here – it was the industry he found frustrating.

“IMAGINE BRUCE SPRINGSTEEN driving across America … in a Honda Civic.” It’s 10pm at Wellington’s Soundtrax Studios, where Ian Morris aka Tex Pistol, Callie Blood and Jim Hall are producing a jingle for a skin cancer cream.

Hall is explaining why one idea – to use Springsteen’s ‘Cover Me’ – wouldn’t work. “Cover me? Springsteen never gets out of his car!” 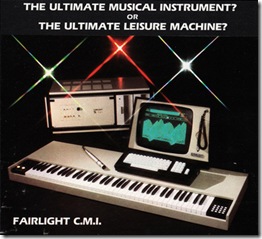 Hall is in the production seat for this job, while Morris engineers and operates the Fairlight synthesiser. Blood, who wrote the jingle, concentrates on the vocal which is being sung by Rikki Morris – of ‘Nobody Else’ fame – in his first commercial appearance. The session’s only been going an hour, but already Rikki’s vocal track is almost complete: squeaky pop over a backing that recalls Georgie Fame’s ‘Yeh Yeh’.

The 30-second jingle extolling the virtues of UV cream quickly becomes embedded in the consciousness, as Ian coaxes his brother through take after take: “Hold that G … make that hot hotter … one more time for Ringo.”

What’s really remarkable is the speed and competence of the work. Morris decides to double-track the vocal as an experiment. He slows down the tape, then Rikki adds another vocal at a lower pitch. At normal speed the jingle sounds as poppy as a Madonna single.

“What we really want,” grins Hall, “is someone blonde and unreasonably young – like Kylie Minogue. ‘I could be so sunburnt …’ ”

Main vocal complete, the musical magpies pick up guitars to work out some fills. Morris plays a line from Exile On Main Street’s ‘Shake Your Hips’, while Hall tries out familiar licks from With the Beatles.

Time for the backing vocals. In walk Annie Crummer and Barbara Griffin, moonlighting from the Holidaymakers’ album sessions taking place in Marmalade Studios next door. Hall plays the backing melodies on his guitar, and within half an hour Blood, Crummer and Griffin have oo’ed and ah’d three-part harmonies. Morris alters the parts of the final chord; the result echoes the famous dissonance that ends ‘She Loves You’.

Vocals down, it’s still only 11pm as the final touches are recorded. There’s some garbage in there, I think it’s the hi-hats,” says Hall. He wants some holes in the final mix, but proceeds to pack more into the jingle. “I think it needs some warm Georgie left hand,” he says, quickly working out a piano part and recording it. “Maybe a sax fill.” Hall works out a riff and records it. “Is that too much like the original?” he thinks aloud.

Meanwhile Morris is tapping away at the Fairlight, fine-tuning tracks already recorded, changing instruments at the flick of a switch from Hammond organ to Yamaha piano to church organ. He decides the opening is a bit limp, so quickly finds a metallic drum sound, works it into a fanfare … and the result booms out like the start of Hawaii Five-O.

“I think I know a way to get bagpipes in there,” muses Hall, but three hours after they began, it’s all been completed: ‘Melanoma with Matt Bianco.’