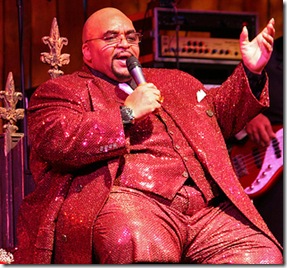 When Solomon Burke makes an entrance, it’s obvious that royalty has arrived. I once witnessed the self-proclaimed King of Rock’n’Soul take the stage. It was just a few blocks from Chicago’s Chess Studios, on the fabled Michigan Avenue. Solomon was resplendent in an ecclesiastical purple cloak with gold trimmings. A crown sat atop his pompadour, but eclipsing it all was his massive scarlet suit, which needed a volume control of its own.

Solomon Burke is a giant, in all respects, as testified by the hits he rattled through that night: ‘Everybody Needs Somebody to Love’, ‘Cry to Me’ (both covered by the Stones), ‘If You Need Me’, ‘Just Out of Reach’ … he came across like an affable, hammy Don Corleone, making an offer no one could refuse: he was the Godfather of Groove.

Nearly 15 years later, I’m wondering what to call him in a conversation about his just-released Don’t Give Up On Me. Given his royal status, perhaps it should be Your Highness? “You can call me anything you want,” he says, “except James Brown and Bobby Womack.” Solomon then chuckles at his own joke; his laugh is slow and a little wheezy, but has all the hearty warmth of his legendary voice. Jerry Wexler described it as “an instrument of exquisite sensitivity”, but Solomon is also legendary for being a preacher, a bishop in the House of God for All People, a licensed mortician fond of Six Feet Under, the father of 21 children and an entrepreneur with notorious cheek. 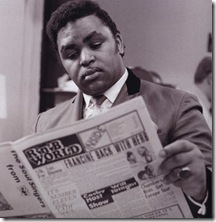 A few months back, Burke took a phone call from someone wanting him to join Fat Possum. Having just been asked to join the Big Bears, he thought it was a football team looking for a mascot – and money. Instead it was the manager of the hip blues label, offering to record Solomon singing tunes especially written for him by some fans; people with names like Dan Penn, Bob Dylan, Elvis Costello, Nick Lowe, Van Morrison and Tom Waits.

Burke was a little dubious, but agreed to meet the intended producer Joe Henry (Scar) at a Jewish deli in LA. “They have the best lox and eggs and bagels you could ever find … I’m thinking, Lord God, this guy is kinda young, can he handle it?” Then Henry ordered hash browns smothered in onions, scrambled eggs with lots of cheese. “The waitress asks, ‘What kind of cheese?’ Joe says, ‘Cheddar cheese, American cheese, whatever – and I want two pork chops fried crispie – with a side order of gravy.’ And I’m thinking, This is our producer! This is the man! He is the man!”

Henry was born in North Carolina so he could talk Southern culture with Burke: ham, grits and biscuits. And musically they clicked as well; in only four days Henry captured a greasy Southern soul sound. He knew what he wanted – “something between The Band’s Music from Big Pink and Sam Cooke’s Nightbeat” – and when Billy Preston couldn’t make the gig, he crucially augmented the young band with an organist from Burke’s church.

“Brother Rudy Copeland is 29 years old, blind but a great player with a fantastic sense of humour. He came in and made the whole session. A beautiful situation. I said just follow me babe, do what we do in church.

“If the organist feels you, they can project that spiritual reality type of feeling with whatever you do. If you’re singing …” – and here Solomon starts serenading ‘Ole Man River’ down the phone – “the organ swells and it’s like strings and flugelhorns working together all on one chord.” 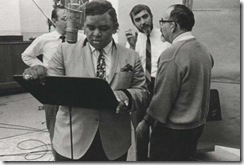 Solomon thanks the Lord, with good reason. “I’m so proud I was chosen to make this record,” he says, but the feeling was shared. Elvis Costello wasn’t satisfied with just posting in his apocalyptic art ballad ‘The Judgment’, he had to drop by the session. “He didn’t say anything to the engineers, he just came into the studio where I was and said, ‘Hi, I’m Elvis’. Everyone else was running round saying ‘Elvis is here! Elvis is here!’ I thought, these people have cracked up. I thought maybe they were seeing a reincarnation of Elvis Presley. Then with that great accent of his, he says, ‘Hi my name is Elvis Costello – did you do my song yet?’ ”

Solomon hadn’t even heard it – “For a minute it was, hold it, the guy might take the song back” – but Costello sat down and sang it for him. “I’m sitting there getting a free concert from Elvis Costello. I’m thinking, give me a camera, someone take a picture quick.” Costello described how he’d written it: with his wife, he’d taken a line from Burke’s ‘The Price’, from 1964. He said, “It’s our favourite song – ‘where the price ends, the judgment begins’. And bam! It was, Give me the song!”

Burke doesn’t have any problems combining his work in the church with his work on stage. “They’re all one. It’s all God’s music – depends on how you proclaim it and name it and how you deliver it. And I try to deliver every one of these things with a message: a song of love, a song of happiness, a song of joy. And the secret of the ministry is to preach good news: that’s the gospel, and every one of these songs has a good-news message.” As the Tom Waits song suggests, just keep a diamond in your mind. “That’s a great song. Don’t think small of yourself, think big: something that’s not going to wear out, that you can put a price on. Put a diamond in your mind; keep your diamond in your mind.”

Burke oozes sincerity – as a televangelist, he’d be bigger than Telethon – and so he should. He’s been a preacher since he first took to the pulpit in his family church at the age of seven. At 12 he was broadcasting his “radio ministry” regularly. It’s no wonder that the title song brought along by his old friend Dan Penn especially touched a chord. “For him to come up with that song was a mindblower! Because it not only says, don’t give up on me. It also says, don’t give up on you. We all fall short, we all have bad days, nobody’s perfect, but there’s always tomorrow. And as long as you believe there’s a tomorrow, there’ll be a tomorrow.”

Once again it’s time for Solomon Burke to swap his cassock for a cape and switch the altar to a stage. He thanks the Lord for his good fortune – and the rest of us can only add, Amen.