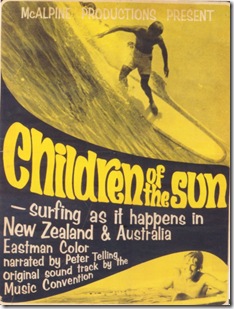 Early in this summer which has never quite arrived, Trade Me featured a listing for the soundtrack of Children of the Sun. This cult surfing doco is New Zealand’s equivalent of Bruce Brown’s classic 1966 film Endless Summer.

The soundtrack EP – by Hamilton’s Music Convention - is regarded as a New Zealand psychedelic classic, featuring a sitar and heavily phased guitar from Rob O’Donnell. The opening track ‘Belly Board Beat’ has a stonking drum solo from Sean Kelly. It can be heard here, or on Grant Gillander’s second New Zealand psychedelia compilation, A Day In My Mind's Mind, Vol 2 (EMI).

On Trade Me, the Children of the Sun EP – water stained of course – called for opening bids from about NZ$300. But the entire film (and soundtrack) can be experienced on NZ On Screen here. It was shot by Andrew McAlpine over three years, on beaches all around New Zealand and Australia, and released in 1968. The editor was Kelvin Peach, son of the legendary Tanza sound engineer Noel Peach. The essential local surfing text is Luke Williamson’s utopian Gone Surfing: the Golden Years of Surfing in New Zealand, 1950-1960 (Penguin, 2000).