The Man from Turkey Scratch 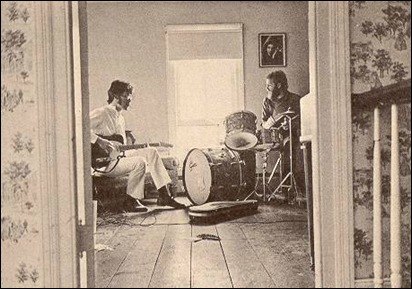 And so Levon Helm passes from this mortal coil. The journey from Turkey Scratch, Arkansas, to the stages of the world – from seeing minstrel shows and Elvis in a tent, to being booed in stadiums – was like several lifetimes.

The Band always brought out the best in some music writers, and many had their obits waiting for Levon’s death a few hours ago from cancer, after a couple of days’ warning from his family. NPR has a swag of audio: archive programmes and past interviews. Rolling Stone has put some classic pieces on-line, including their 1969 cover story, and the great piece “A Portrait of the Band as Young Hawks” by Robert Palmer in 1978 (as a teenage saxophonist, he had played many of the same juke joints with the Hawks in the early 1960s). In it, Palmer evocatively describes Helm showing a teenage Robbie Robertson around his territory, the tiny town of West Helena on the banks of the Mississippi:

Levon Helm, the intense, wiry drummer who was to initiate him into its mysteries, met him at the Helena bus station and took him out to the Helm farmhouse, which was built on stilts to keep it dry during spring floods when the Big Muddy overran its banks. Levon's dad, a cotton farmer, told tales that made them split their sides laughing, and his mother cooked food that made them split their sides eating. Later, with Levon at the wheel, Robbie had a look at the town. There were black folks everywhere — he could remember seeing only a few in his entire life — and even the white folks talked like them, in a thick, rolling Afro-English that came out as heavy and sweet as molasses but could turn as acrid as turpentine if your accent or behavior were strange.

More on Levon soon. The photo above shows him at the drums, jamming near Woodstock with Robertson; it’s from the gatefold of The Band. Meanwhile, below is an 18-minute clip of the Band playing near their peak, live in Pittsburgh, November 1970, just after the release of Stage Fright. (Monitor: QUQ)

In other news, Leonard Cohen has been in court, confronting his former manager, who not only stole US $9.5m from him, but has been harrassing and threatening him for years via emails and texts. The New York Times reports that at the hearing Cohen said to her …

it gave him “no pleasure to see my one-time friend shackled to a chair in a court of law, her considerable gifts bent to the service of darkness, deceit and revenge,” and thanked Ms. Lynch “for insisting on a jury trial, thus exposing to the light of day her massive depletion of my retirement savings and yearly earnings, and allowing the court to observe her profoundly unwholesome, obscene and relentless strategies to escape the consequences of her wrongdoing.”

Even so, Mr. Cohen said he hoped that “a spirit of understanding will convert her heart from hatred to remorse, from anger to kindness, from the deadly intoxication of revenge to the lowly practices of self-reform.”