Take it to the bridge 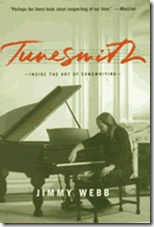 TUNESMITH: Inside the Art of Songwriting, by Jimmy Webb (Hyperion)

Someone once asked the great songwriter Sammy Cahn – his name sits below titles on countless Sinatra records – the perennial question of his profession.

What came first? The music or they lyrics?

“The phone call,” he replied.

Song writing is hard graft. Only amateurs think its easy, the ones who have their eye on the quick money. They’re all over the radio, but few of their efforts will make it onto classic hits playlists. “Hack writers don’t get writer’s block and paradoxically, neither do hungry ones.”

That’s a line from Jimmy Webb’s book Tunesmith. It’s a  primer about song writing. Most bookshops have them in their “making it in the music business” section. Strangely, they’re always written by unknowns. if they were that smart, or that hot, how did they get time to write about it? It seems, those that can, do; those that can’t, write “how to” books. 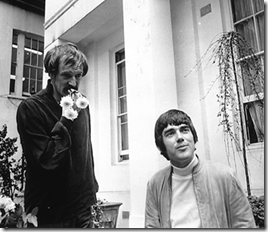 But Jimmy’s different. He’s the man who left the cake out in the rain, lost the recipe, and somehow made that dreadful image into a million seller, an unforgettable baroque pop epic. But I’ll forgive him ‘MacArthur Park’ and even his overblown performance in Auckland recently [1999]. To coin a phrase (and probably get sued), he’s a man who’s made the whole world sing.

My definition of a great song is something others want to sing, in the bath, at football, in the playground; one that nags you all day; one that continues to intrigue through an odd chord change, a crystal-clear image, a catchphrase that enters the language – or a cliché that finally gains substance when put to a melody: “your guess as good as mine”, “you always take the weather with you” …

The world has enough great singers, but not nearly enough great songwriters. Jimmy Webb’s Tunesmith wants to change that (and save us from those dire efforts that should stay inside notebooks). It’s an eccentric scramble of a book, given focus by the intensity of Webb’s purpose. The beauty is that it can be read on a technical or anecdotal level, and either way the result for the reader is inspiration (the hardest motivator to ignite).

Tunesmith reflects a lifetime’s obsession with song writing. It’s a big-hearted book that wants to share not just the lessons he’s learnt, but his passion for the art form. The advice ranges from pithy aphorisms and cautionary tales, to textbook talk about rhyme, narrative sense, collaboration, melodic rules and risks, plus cosmic stuff about creativity and even keeping your sanity. There’s also legal advice, about avoiding plagiarism and looking after your publishing. Somehow, he manages to both demystify the process and keep the magic alive.

But then there’s always a story to keep your head from going up, up and away. Like the executor of Cole Porter’s estate who licensed on of his songs for advertising use. He knew he’d blown it when he saw a TV ad for toilet cleaner, and heard the jingle: “I’ve got you … under my rim.”

Written for Aprap, the magazine of the Australasian Performing Right Association, 1999. Shortly before this, Webb performed in Auckland’s intimate Concert Chamber in a double bill with Dan Penn and Spooner Oldham. Song writing heaven, attended by every old music hand in town, though I didn’t hear this favourite: