Sailing down the Mississippi is like driving along an interstate highway. There is no scenery. Sure, there’s plenty of action – the produce of middle America goes by on barges the size of floating football fields; people zip around on pleasure craft – but not much to look at.

All you can see are its uniform banks, the thousands of miles of neat levees built to save the Mississippi Valley from flood. Beyond the levees the land is flat, and covered by non­descript scrub and trees. Occasionally there is a small town, its rundown jetty a symbol of an earlier, bustling economy: but the river doesn’t stop there anymore.

Perversely, the impact of the Mississippi is reduced by its size. It’s over a mile wide in parts, so the current, though swift, looks deceptively gentle. The drama and beauty of the world’s most famous river are hidden.

Its colour isn’t blue but a deep tan, its muddy waters giving the great bluesman his name. The Indians called it the “Father of Waters”; the name Mississippi is thought to come from two Choctaw words, missah (“old big”) and sippah (“strong river”).

The Mississippi formed the South, both literally and figuratively. Over eons, its tributaries took soil from the slopes of the Appalachians in the east and the Rockies in the west, from the prairies and plains, and carried it downstream to form the fertile valley and delta. Over a million tons of mud a day is deposited into the Gulf of Mexico. 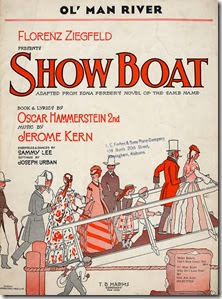 Ole Man River keeps on rolling, seemingly unchanged. Even the standard from Jerome Kern and Oscar Hammerstein’s 1927 musical Show Boat has less permanence: over the years the song’s lyrics have often been toned down to make them less offensive. The original version opened with “Niggers all work on the Mississippi / Niggers all work while the white folks play.” In the next 10 years the “niggers” became “darkies” then “coloured folks”. Finally the line became: “Here we all work on the Mississippi / Here we all work while the white folks play ...”

The Mississippi and its steamboats have, however, made many contributions to the language. “Highfalutin’” came from the fluted steamboat chimneys, which became symbols of wealth and power. The “riff-raff” were the poor immigrants who travelled on rafts, using oars called rifs. Steamboats carried live hogs onboard to be killed and cooked fresh; they were washed down before boarding and the water – hogwash – thrown out.

For many people, their impressions of life on a paddlesteamer were formed by the 1936 film version of Show Boat, and the Mississippi Queen experience does all it can to fulfil the fantasies of its passengers. A troupe of entertainers is on board to recreate the showboat era, and their vast repertoire of musical Americana changes each night. Be it ragtime revue, Broadway extravaganza, or “radio days” big band, the music takes the passengers back to the ballrooms of their youth – all but a few are on the slower side of 70. 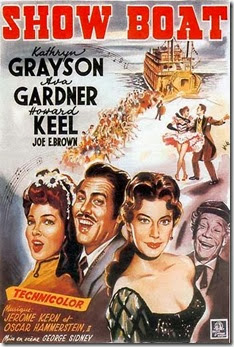 And for those without a dancing partner, the boat provides a couple of dapper professional minglers to whisk the wallflowers onto the parquet.

Every activity onboard maintains the theme of steamboatin’ through the South, from the Mardi Gras costume ball to Sunday’s “hymns of Dixie” non-denominational service. It’s like Huck Finn goes to Hi-De-Hi. And the lavish gourmet meals – available from 6.45am till midnight – also celebrate the South. The menu could be the lyrics of Hank Williams’s ‘Jambalaya’: crawfish pie, filet gumbo, Creole chicken, shrimp étoufée.

What does all this cost? A three night cruise ranges between USD $435 and $1410, depending on your cabin. The cheapest cabin has a single bed and no window; top of the line is the “captain’s veranda suite” at the front of the boat. The longest cruise is 14 nights; to stay in the most luxurious suite for that time costs $6790.

I had a companion on the journey down the Mississippi, an American called Arturo (“Arky”) Gonzalez. He was a travel writer – a real one – in his late 50s. Built for comfort, not speed, it was only fair that he had a cabin a couple of notches above mine. It was about time his luck changed, going by some of the anecdotes of this marvellous globe-trotting raconteur.

In the 1950s Arky had worked at Time magazine with Joseph Heller, who was writing Catch 22 at the time. “One day Joe said, I’ve written a character with your name, though he’s nasty: nothing like you. D’you mind?” I said, well if the book’s a failure it doesn’t matter. But if it’s a huge success – and I want it to be – how would you feel if you knew Herman Wouk and your name was Queeg?”

Together we enjoyed the hospitality of the Mississippi Queen and explored the small towns that the boat stopped at on its way down the river. Once, the steamboats were vital to the survival of the isolated river towns and farms. The boats came with news, gossip, visitors, tools and luxuries; they left with farm produce, family and friends.

“The river is riz!” declared a river town newspaper in the 1840s. “The boat bells are ringing, ships are loading, draymen swearing, Negroes singing, clerks marking, captains busy, merchants selling, packages rolling, boxes tumbling, wares rumbling, and everybody appears up to his eyes in business.”

Now, the towns depend on other industries, such as tourism. But the sight of a steamboat still creates the excitement it did in Twain’s day. Leaving Memphis, the Mississippi Queen was farewelled by a flotilla of small boats and by crowds on the river bank, honking their car horns and waving. And every small town the boat visited – Vicksburg, Natchez, St Francisville – seemed to come alive for the day. 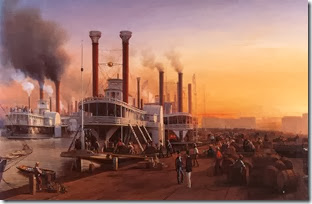 The scene has hardly changed from Twain’s description in Life on the Mississippi, when the sleepy river towns shake themselves awake when a black drayman, “famous for his quick eye and prodigious voice,” notices a film of dark smoke appear above a remote point and cries “S-t-e-a-m-boat a-comin’! ... The town drunkard stirs, the clerks wake up, every house and store pours out a human contribution. In a twinkling the dead town is alive and moving.”

Soon, the paddle steamer comes into sight on “the great Mississippi, the majestic, the magnificent Mississippi, rolling its mile-wide tide along, shining in the sun.”

Ten minutes later the steamer is under way again, the town dies down, and the town drunkard is asleep once more.

The US Public Broadcasting System had an excellent series on the Mississippi called River of Song – its website is still online, with a thorough explanation of the social and economic context behind the river’s connection with music. Mississippi River enthusiast Dean Klinkenberg has assembled a lengthy list of river-related songs. And for a novel set in the 1920s, combining the fading days of the paddle steamer with the arrival of jazz, plus a gripping tale of “guilt and vengeance”, I thoroughly recommend Tim Gautreaux’s The Missing. Roger Miller paid tribute to his hero Mark Twain’s The Adventures of Huckleberry Finn with his Broadway musical Big River. Here he sings one of the highlights, the moving ‘River in the Rain’.