THE CONVERSATIONS: Walter Murch and the Art of Editing Film, by Michael Ondaatje (Bloomsbury, 2002). 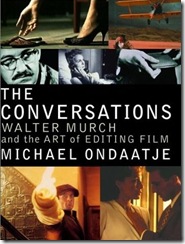 Film directors are like Napoleon, all-powerful and usually vertically challenged. “But even Napoleon needed his marshals,” says Michael Ondaatje in this book, a series of conversations with leading US film editor Walter Murch. Although just one of hundreds of names seen in the credits when the crowd is filing out of the cinema, the film editor is crucial to turning the director’s vision into a viewable reality. The film editor – and many of the greats have been women, like Anne Coates (Lawrence of Arabia, Out of Sight) or Thelma Schoonmaker (longtime Scorsese editor) – is one of the unsung heroes of the form; they can shape the mood, create the pace, make the story work.

It was when Ondaatje’s novel The English Patient was being turned into a film that he befriended Murch, an intellectual as well as a craftsman. Murch’s talent helped Francis Ford Coppola shape some of the most important American movies of the 1970s: the first two Godfather films, Apocalypse Now, and 1974’s The Conversation.  The latter gives this book its title, and was recently restored. Its very subject matter concentrates the mind on the aural side of film-making; it’s about a sound engineer (Gene Hackman) and specialist in surveillance work who hears of a murder plot. Filmed on a low budget between the first two Godfathers, it encapsulates the issues Murch faces in his job. A simple matter like the clothing a character wears can make the editor’s job easy or impossible. If the costume department insists on strutting its stuff, dressing the lead in a variety of outfits, that limits what an editor can do if the story has to be reconstructed at the editing desk.

Murch came to editing after being a sound editor, and he expounds on the use of music and sound in movies. His work on American Graffiti revolutionised the use of pop in movies. 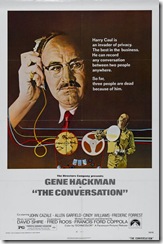 Most films now have a relentless soundtrack, either telegraphing narrative punches, crassly manipulating the emotions, or inappropriately creating a merchandising tie-in. “Most movies use music the way athletes use steroids,” says Murch. “It gives you an edge, it gives you speed, but it’s unhealthy for the organism in the long run.”

There’s nothing subtle about mainstream movie making now, and The Conversations returns the audience to the basic craft, inviting them in so their experience is enhanced. It’s the best book about filmmaking since Francois Truffaut's similarly illuminating Hitchcock.