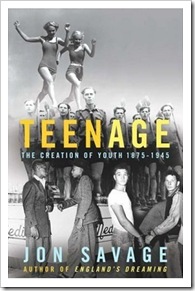 In September 1944, while pimply GIs were killing and being killed as they trudged towards Berlin, a new magazine was launched back home. Seventeen was niche-marketed towards the girls they had left behind; it aimed to tap into the advertising generated by the $750 million spending capacity of American youth. The magazine’s cover lines described its mix: “Young fashions & beauty, movies & music, ideas & people”. Inside, the zeitgeist was hot-wired to capitalism.

This demographic had always existed, in the neverland between childhood and adulthood, but it was in 1944 that a name for it finally took hold: the teenager. The word had been freely used since the mid-1930s, but now it became the accepted description of the age group. Teenagers were not adolescents, and very few were juvenile delinquents; they were no longer rebels without a name, and they now had a cause: consumerism.

The first celebrity photo spread in Seventeen was of Frank Sinatra, whose shows were causing riots among teenage New York girls. Fashion was the mainstay of the magazine, but it also offered advice to its “adults-in-training”. It was a support for young girls, some of whom could only pour their feelings into their diaries: “Girls my age feel very insecure about themselves and are just beginning to discover that they are individuals with their own ideas, thoughts and habits.”

When Anne Frank wrote that, she was about to celebrate her 15th and last birthday in hiding with her family in a cramped Amsterdam attic. Soon she would die in a concentration camp. In Munich, the last executions of loosely organised teenage resisters to the Nazis were taking place. Whether the non-conformity was politically based – as with Sophie Scholl, guillotined a year before – or behavioural, the Gestapo’s reaction was the same. A member of the Hamburg teenage “swing” set was told during his interrogation, “Anything that starts with Ellington ends with an assassination attempt on the Fuhrer!”

Absurd juxtapositions between the grotesque and the banal are Jon Savage’s stock-in-trade. In this epic survey he leaps between continents and cliques, quoting scholars and scaremongers to show the cultural shifts that lead to the teenager becoming an identifiable demographic. Savage, whose previous major work was the erudite history of punk England’s Dreaming, makes no apologies for favouring the bizarre rather than the bourgeois to make his case.

Youth represents the future, he argues, and “the perennial media typecasting of the adolescent as a genius or a monster continues to encode adult hopes and fears.” 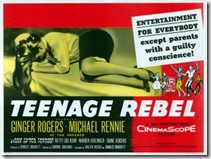 To ignore the iconoclasts for the potential Rotarians is to disengage with the future and misunderstand the nature of youth itself.

Which sounds like an intellectual justification for having your cake and eating it. Savage wallows in the sensational aspects of his topic, while dressing his research up with the verbal exhibitionism beloved by the practitioners of cultural studies. His thesis – that the rise of the teenager began many decades before James Dean, and that battles between rebellious adolescents and controlling adults are as perennial as the accompanying moral panics – is sometimes hard to make out. But, like a hormonal teenager, he has a lot of fun making out.

It is a long journey from the grim post-Civil War era to the word “Teenage” beckoning ahead like a neon light at the end of a yellow brick road. Savage handicaps himself by opening with two 19th century case studies to portray his “teenagers: genius or monster?” argument. One is a young artist who dreams of fame and dies of tuberculosis; the other enjoys his notoriety as a serial child-killer. The pair share more than an era, says Savage: “They forced their respective societies to recognise that … it was no longer adequate to think that adulthood immediately followed childhood: they were the harbingers of a new intermediate state that as yet had no name.”

Just out of the starting gates, Savage leaps back a century to quote Rousseau, who warned that puberty had such a profound effect that it represented “a second birth”. The symptoms? “A change of temper, frequent outbreaks of anger, a perpetual stirring of the mind.” In 1762, no one could hear you scream on Bebo or Facebook.

The flamboyant tangents and connections can be dubious or distracting. Oscar Wilde’s youthcentric Picture of Dorian Grey is followed by the success of Peter Pan, reinforcing the desire for delayed maturity. Boy Scout founder Baden-Powell unveiled his manifesto for a junior, survivalist army just five days before attending the opening of Peter Pan. The future of the beleaguered Empire lay in its enfeebled youth, but that was just one motivation, suggests Savage: the other was BP’s obvious arrested development.

Be prepared was the Scouts’ motto, and while they knew how to shine their shoes when the First World War came along, no one was prepared for the slaughter, which included 3 million adolescents. The Great War begat the great cultural shift: it destroyed the automatic obedience that elders had expected from youth, lead to the decline of the power of the churches, and a rise in juvenile crime and truancy.

It also encouraged young people to live for the present moment: Peter Pan morphs into The Great Gatsby. Christianity and Scouting were no match for actual shelling, and with Prohibition making the law an ass, in the 1920s the Bright Young Things partied.

But not in Germany, where Hitler realised that youth was a social force too important to be left to its own devices. Savage is strongest when discussing the success of the Hitler Youth movement and reactions to it in Germany. Here, his links make more sense, as he describes the similarities to Scouting – the militaristic over-tones, the emphasis on preparedness – but with an evil purpose beyond imperialism.

Then the Depression halts the party: 200,000 youth vagabonds roam the back roads of the US, while in Britain, Mosley’s Union of Fascists enjoys a brief popularity.

Back and forth he leaps across the Atlantic, covering conformists and rebels, and giving far more space to the latter. In this history, the cliques in American high schools or the lemming-like Hitler Youth uncharacteristically take the back seat while sub-cults take centre stage. In occupied Paris a group of provocative dandies called the Zazous celebrate American culture while, even more precariously, the Hamburg swing kids do the same in Nazi Germany. In Los Angeles the Hispanic zoot-suiters are beaten up by rioting US sailors, then get arrested. (The Zazous and the zoot-suiters both get their style from the ultimate outsiders, the African-American musicians who also provide the soundtrack.)

With its over-reaching eclecticism, Teenage is maddening but compelling; its 500 densely packed pages are also something of an endurance test. Oddly, for a book describing the discovery of the teenager, they are often seen but not heard. Meanwhile, our hip professor has got diverted emulating Lipstick Traces, Greil Marcus’s ostentatious mix of pop culture and politics, or updating Luc Sante’s history of underground culture, Low Life.

Savage brings his panoramic survey to a hurried end, with the Hitler Youth being sacrificed by its cynical masters, and the atom bomb obliterating Hiroshima and Nagasaki. In the New York Times edition announcing the latter, a news item mentions the first polling company surveying the preferences of US teenagers. The new psychology again promotes living in the moment – enter the existentialists – and to be materially oriented. The teenager was on the ascendant and, with the baby boom already under way, this newly labelled consumer would dominate the next 50 years and beyond. - Chris Bourke

(originally published in the Sunday Star-Times, 2007)