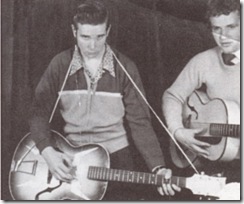 From this distance it’s difficult to comprehend the moral panic associated with early rock’n’roll in New Zealand. It is no exaggeration to say that just the sight of a greaser with winklepickers would make mothers cover their toddlers in their prams. Tanked dads with RSA badges on their lapels would accusingly spit out “bodgie” with the vehemence of the Jew-hating Nazis they had just fought against. Underage drinking and teenage sex are comparatively condoned now with RTD alco-pops and STDs rampant, but in the mid-1950s they so outraged society there was a Parliamentary commission examining youth morals.

So you have to admire the irrepressible spirit displayed by the primeval New Zealand rock’n’rollers collected on Pie Cart Rock’n’Roll. Despite the social opprobrium (and the difficulty of acquiring instruments or 78s) they were stomping up a storm in the years before the Beatles became the acceptable face of the youth revolution. Compiled with typical obsessive zeal by John Baker, our best rock’n’roll archivist, we can now see how many rebels had a cause. Johnny Devlin stole the headlines with his ready-to-tear stage suits, but hundreds of others were trying to shake, rattle and roll. “Maori Cowboy” Johnny Cooper led the way with ‘Rock Around the Clock’, but his ‘Pie Cart Rock’n’Roll’ spoke more about us: “Rock to the rhythm of the pea, pie, pud.” Peter Lewis’s ‘Four City Rock’ kept up the local content – “They’re rockin’ in the milkbars, rockin’ in the halls / Rockin’ on the sidewalks where the Kiwi rhythm calls” – and the splendid photo (above) shows him to be a brooding Brylcreem king.

Max Merritt and his Meteors still outclass all comers, but there is no shortage of apprentices to the master, or aging bandleaders wanting to stay on the bandwagon (among them Benny’s Five with the timeless ‘Haka Boogie’, and Bob Paris Combo with ‘Dragstrip’). Eddie Howell does a fine Elvis, Glyn Tucker is a Buddy Holly ingenue, and Carole Davies that rarity – a sassy singing widgie. Clyde Scott and the Zanyopolis (‘Gravedigger Rock’) deserve a mention on their name alone, but the unsung heroes are the honking sax players. Howard Morrison is as hokey as ever on ‘Gum Drop’, competent but fake next to the kids at the Putiki marae, Sam Mataparae with his Rockin’ Rockers. These acts and many of their members may now be in the great echo chamber of the sky – and their recordings may owe more to Edison than Sun – but their ghostly sounds live on, as does their legacy, down the hall any Saturday night. - Chris Bourke