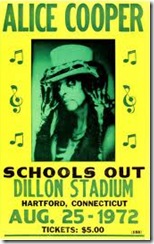 The sentimental US columnist Bob Greene – now in the journalistic dogbox – once wrote a piece about having dinner with Alice Cooper in the late 80s. When Cooper was at his Billion Dollar Babies height c.1972, Greene went on the road with his band, and his article became a book. Cooper was not biting heads off chickens the night they had dinner, he was talking more about his golf handicap.

He recalled the time he met Elvis Presley. When he put out his hand for a shake, Elvis took hold, then did a swift judo move and tossed Cooper over his head. Cooper ended up on the ground, facing up. Elvis had his foot pressed firmly on his neck. And the shock rocker knew that he was living in a virtual reality when his first thought was, “What a great album cover this would make!”

At that point, the dessert menu arrives, and Cooper ponders whether he can get the sundae or the tiramisu. His wife puts her hand on his, and gently says, “Live a little, Alice.”

That’s the headline explained. It came to me when thinking of the personality change the New Zealand Herald has each summer. Don’t worry about the Nanny State, this is the Nanny Fourth Estate. Every day there’s some new warning about the dangers of daily life: put on your skin cream, wear your water wings, burnt sausages cause cancer, don’t leave your dog tied to its kennel without water or your baby in the SUV. Surveys have proved these things are bad for your health, and the economy.

So I enjoyed coming across this clip which shows that sometimes you can get through life without training wheels, though it takes some luck. Click – carefully – on the arrow.