1987 – A rental car pulls up in the main street of Gore, the “country music capital” of New Zealand. Five men in suits pile out, toting instruments. All eyes in the small South Island town seem to be watching as they set up on the pavement and start busking.

The Warratahs’ arrival for the Golden Guitar Awards worried the locals; for unknowns, they looked too organised. “It was as though we’d come to deal death to Gore!” says Wayne Mason, laughing at the wary welcome. The Warratahs left with several awards and many new friends.

1993 – It’s 3.00am in Greymouth and bitterly cold. On their way back to a motel during the Big Sky tour, the Warratahs walk into a burger bar. A drunk recognises them from the Interislander ad on TV. “Hey Warratahs,” he demands. “Sing us a song.”

The West Coaster wobbles a second, then croaks, “Another Saturday night, but I ain’t got nobody …” The Warratahs have no choice but to join in. “I got some money ’cos I just got paid,” they sing, like a weary doo-wop quintet.

New Zealand Post recently issued a series of stamps featuring icons of Kiwiana. Immortalised for the world to see are Buzzy Bees, Jandals, Swanndris, pavlovas, rugby balls. Familiar items that feel as though they’ve always been there: we’re so comfortable with them that their uniqueness is in danger of being taken for granted.

The Warratahs – named after a (misspelled) Australian flower or a metal fencing stake – have reached that status in New Zealand popular culture. They will probably never be rewarded with a postage stamp, as Hank Williams and Patsy Cline have in the US. But the Warratahs and their songs have won the affection of the New Zealand public to an extent usually experienced only by sportspeople, or phenomena such as Kiri Te Kanawa or Selwyn Toogood. 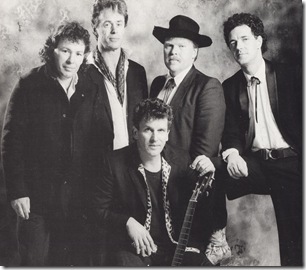 Radio airplay and television exposure have played their part, but the Warratahs have earned their high profile mostly through sheer hard work. Having played what seems like a tiny wooden hall down the end of every gravel road in New Zealand, the band won over the heartland of the country long before the documentary makers knew that there was a heartland there.

They have warmed packed stadiums and cold halls where the dance-floor is sprinkled with talcum powder. From Dansey’s Pass to Karamea, Utiku to Karioi, it’s likely the Warratahs have been through often enough to be on first-name terms with the locals and vice versa.

The band keeps getting invited back because they reliably deliver what the Irish call “the craic” – atmosphere, good times, good music, good yarning. They leave their listeners whistling melodies, from songs about real people, in real situations. The music is equal parts Everly Brothers, Carter Family, Elvis, Johnny Cash and Hank Williams, seasoned with such local heroes as the Tumbleweeds, Garner Wayne and Peter Posa.

The Warratahs may be adept at rattling off Chuck Berry roadmaps, but the band is the first to have brought New Zealand into its songs without hokeyness or affectation. The themes are perennial – lost love, failed dreams and keeping your bags packed – but the references bring them home to us.

In so many of the songs, it’s time to change an address. Maureen shoots through to Melbourne because “I had my eyes on a new horizon / She had better things to do … better things for Maureen.” In the Celtic ballad ‘Another Town’ the singers seeks solace with friends in Dunedin; ‘Nothing Every Happens Round Here’ is a loving tribute to Wellington; ‘Taranaki’ is a visit to the folks, who live just below the snowline. In ‘St Peter’s Rendezvous’ the old man, a member of the RSA generation, broods about unfulfilled ambitions and denied opportunities. The songs are contemporary and timeless. 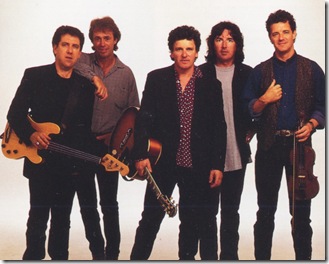 “All those years of touring, playing every small centre imaginable, were worth it,” says Barry Saunders. After years of kicking around in various bands together, he and his closest friends have finally found what they’ve been avoiding all their lives: a career.

And they’ve given New Zealand another institution. Like the Main Trunk Line and the Edmonds Cookbook, the place wouldn’t be the same without them.