ON THE ROAD: the Original Scroll, by Jack Kerouac (Penguin Classics); THE BEATS: From Kerouac to Kesey, an Illustrated Journey through the Beat Generation, by Mike Evans (Running Press).

Jack Kerouac is one writer who could truthfully say “a dog ate my notes”. The tail-end of On the Road: the Original Scroll attests to it: the last 10 pages of Kerouac’s manuscript were chewed by Potchky, the dog of Beat Generation footnote Lucien Carr, and have been reconstructed here by editors using various drafts. 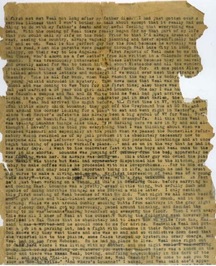 The scroll in question is not some mythical Biblical object, but the legendary first version of Kerouac’s classic novel. This 120-foot roll of taped-together tracing paper was bought at auction six years ago by the owner of an American football team (who also owns one of Elvis’s guitars). He paid $2.3 million in non-mythical US dollars, and immediately sent the scroll on the road for public exhibitions. (Right click here for a larger image.)

On the Road was published 50 years ago, hence this long-awaited unrolling of The Scroll, presented as Kerouac originally typed it, without a single paragraph break and only a few commas to draw breath. This is the uncensored manuscript, with references to sex and drugs, women who enjoy both, and even boy-on-boy action, all faithfully retained, along with the participants’ real names. Any similarities with people living or dead were purely intentional. Libel lawyers balked, even if hedonistic show-offs such as William Burroughs and Allen Ginsberg were happy to sign releases.

Its genesis actually dates to the late 1940s, when Kerouac first hitchhiked across the US, constantly scribbling in notebooks. The scroll was the first complete version, written in three teeth-grinding weeks in March 1951. That part of the legend is true, though Kerouac was fuelled by coffee, not Benzedrine. Late nights and sweaty T-shirts, yes, but hardly spontaneous improvised bop prose: he wrote from notes, draft passages and his exceptional memory. After all, most of what he wrote actually took place. Truman Capote – who surprisingly turns up in a drunken cameo in the scroll – may have sneered that On the Road was “typing, not writing”, but it can also be seen as an early non-fiction novel, years before In Cold Blood.

So even though it came out after Rebel Without a Cause, the arrival of rock’n’roll and the building of the interstate highways, On the Road describes the immediate post-war period 10 years earlier, when a desire for stability was more the zeitgeist than subversive tumult. Kerouac rides shotgun as he and his frenzied road-buddy Neal Cassady relentlessly criss-cross the United States, pushing social mores as much as the speed limit, although an unspoken goal is settling down. On the surface, this is the ultimate male-bonding novel; any women along for the ride were strictly in back seat roles. 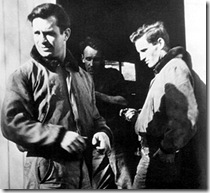 As eventually published, On the Road was an adrenalin rush of cross-continental travel (to no eventual purpose). But the use of real names and incidents add a gritty urgency to the original. This is a coherent travelogue/memoir rather than a dazzling jazz novel, and the key scenes are already present: the failed first hitch-hike on a provincial highway, when Kerouac gives up, drenched after receiving no lifts in the rain. The senorita he meets on a Greyhound bus, leading to a romantic idyll in a Steinbeckian labour camp. The constant fleecing of hitch-hikers for gas money. The mad parties on both coasts, with a stolen car outside, its engine still running. The inevitable return home to Mom’s cooking and a hot bath.                 Above: Kerouac (left) with Cassady (right).

After 100 pages of academic preamble, some of it useful – though words like coterminous stall readers as surely as dirt in a carburettor – the novel’s famous opening passage introduces Kerouac’s lead character, his friend and inspiration, Neal Cassady. Obsessed with chasing women and stealing fast cars, Cassady comes across like Springsteen if he were possessed by the Devil.

Oddly, after we first meet him, he is hardly mentioned for another 100 pages, and this period – when Kerouac is travelling alone – is the most satisfying in the book. Once Cassady is behind the wheel, after a few journeys leaving behind many girlfriends, marriages and abandoned babies in his wake, Kerouac, his prose and our patience all seem to weary of Cassady: we’re beat. Towards the end Kerouac writes, “I was beginning to cross and re-cross towns in America as though I was a travelling salesman.”

There are increasing references to Cassady’s mania: “I suddenly realised that Neal was becoming The Idiot” … “Neal gets crazier every year” … “I knew Neal had gone mad again” … As “Dean Moriarty” in On the Road, Cassady seemed spontaneous, wilful, irresponsible (but great fun at a party). The scroll’s veracity portrays him more as bi-polar, desperate not for company but for medication.

Cassady’s next appearance in history was in 1965 behind the wheel of Ken Kesey’s psychedelic bus, tripping across America on LSD. The influence of the Beats is well explained by the images in Mike Evans’s pictorial account, although the text itself is not so much beat as lacking a pulse. Here are quick biographies of the key Beats, plus the pop culture links, all spelt out in iconic pictures: Kesey and Cassady, Ginsberg and Dylan, The Subterraneans and the Velvet Underground, Lenny Bruce and the once-ubiquitous satirical images of beatniks. Even The Flintstones featured an episode that was all goatees, sandals and bongo drums, man. Above: Cassady (right) with Timothy Leary.

The Beat phenomenon inspired almost as many bad novels as great road journeys, but if you feel tempted to read The Scroll itself, get on board. It’s safer than hitchhiking.