And we'll walk down the avenue in style

And we'll walk down the avenue and we'll smile

And we'll say baby ain't it all worthwhile

When the healing has begun 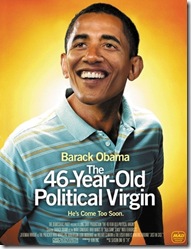 Postscript: if the messianic euphoria is starting to be a worry, a reality check is at the always-brilliant radio programme This American Life. The show just on the eve of the inauguration was thoughtful and all-inclusive, capturing voices from around the US and their attitudes as the new administration was about to start. It began at a climate-change conference, stunned by Obama's emphatic embrace of the issue. They talked to young Marines back from three tours to Iraq and still Bush supporters, then the Veteran's Administration who were stunned to get phone call from the transition team asking what they needed and offering full funding for the first time. Customers in a New Orleans bar, and a button factory where business has gone gang-busters making Obama badges ... and also a retired 93-year-old journalist from small-town Florida, where he had covered Ku Klux Klan meetings in the 1930s only to see 20,000 supporters of all races turn out for a Obama rally there last year. You can listen to it here, free for how long I don't know but even from the archive for 95c US it's a bargain and they need the money.