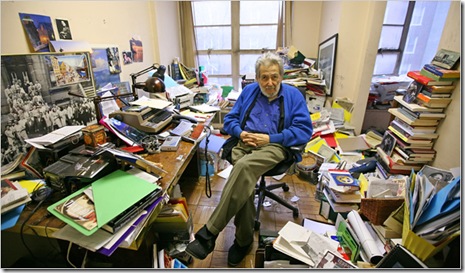 Legendary journalist Nat Hentoff has been sacked by the Village Voice after 50 years. He doesn't seem bothered; he'll keep on writing. "See you somewhere else," he says. Hentoff is 83.

For decades Hentoff's writing has concentrated on his passion for civil rights and the freedom of speech. But he first became known as a music journalist in the 1950s. When I started reading about rock'n'roll, there were hardly any books in the libraries, just Hunter Davies' book on the Beatles, Nik Cohn's Awopbopaloobop (one of the first pop histories, written in six weeks in 1969 and still brilliant). But there were plenty of books on jazz and blues, and many of them had Hentoff's name on them. Oral histories, straight reportage: Hentoff's music writing was about the musicians themselves, rather than what went on in the listener's head. He sat in on sessions by Ellington, Armstrong, Mingus and Davis. Later, he wrote the liner notes for Bob Dylan's first albums, and conducted the myth-making 1966 Playboy interview with him ("A candid conversation with the iconoclastic idol of the folk-rock set").

Hentoff approached his advocacy journalism with courage and an intellectual rigour; he has never been afraid to challenge the left as well as the right, and to take unfashionable positions. He doesn't overburden his music writing with the cerebal analysis of his political work, but the connection is the concern for humanity that comes through both. You don't always get that in music writing.

The Voice at least did the right thing by not just showing him the door with a security guard, struggling with cardboard boxes. (Looking at his desk in the above NY Times pic, I'm pleased to see that it is messier than mine at its worst.) He got the chance to write a gracious farewell column, and the paper printed a lengthy selection of his "greatest hits". Voice colleague Alan Barra penned a tribute, "50 Years of Pissing People Off." As Hentoff himself says, "I'll be putting on my skunk suit at other garden parties, now that I've been excessed from the Voice."

The Voice has a long, distinguished and disreputable history, which Louis Menand details - in a flat-footed kind of way - in the January 5 New Yorker (not on-line). He doesn't concentrate too much on the present but - like so many other inkies - the Voice is in trouble. However pointing the finger at the internet as the sole cause is just publishers shifting the blame; in case after case, proprietors have bought venerable titles and saddled them with debt. They saw golden geese, bought them, then killed them. Marc Cooper's lengthy report behind-the-scenes at the LA Weekly - a recent stable mate of the Voice - indicates some of the problems. At the Voice there has been a revolving door for several years, with long serving staffers either sacked or walking. The magazine survived Rupert Murdoch's ownership, but perhaps won't survive its purchase by New Times Media (which promptly changed its name to Village Voice Media: it liked the cachet of the name, if not the paper). Almost three years ago the New York Observer wrote:

As the dissident Voice staff tells it, the new management is a bunch of out-of-town bean counters bent on dismantling a precious 50-year-old journalistic institution. The new management, in turn, depicts the paper as a haven for thumb-suckers, with a staff so self-satisfied that it refuses to stop writing left-leaning commentary and go out and do some reporting.

The Voice isn't without its faults: its partisanship can be as wrong-headed as the New York Post's, just from the other side. But its influence has been enormous. It created the template for a feisty, useful "city mag" now seen in every city. Its arts criticism could be among the best anywhere, and some of the worst: pretentious and incoherent. Its "Press Clippings" column has been widely copied, as has former music editor Robert Christgau's long-running "Consumer Guide" and his annual critics' poll. The Voice's "Rock Music Quarterly" is the father of the (London) Observer's excellent Observer Music Monthly.

Although Menand concentrates on the Voice's far-distant past - its 1950s beginnings with Norman Mailer and cartoonist Jules Feiffer - in his stolid way, he summed up the issues:

Of course, the paper will share the fate of every other print medium in the digital age, whatever fate that is. Still, more than other magazines and newspapers, the Voice was doing what the Internet does now long before there was an Internet. The Voice was the blogosphere - whose motto might be "Every man his own Norman Mailer" - and Craigslist fifty years before their time. The Voice also helped to create the romance of the journalistic vocation by making journalism seem a calling, a means of self-expression, a creative medium. It opened up an insecure and defensively self-important profession. Until its own success made it irresistible to buyers who imagined that they could do better with a business plan than its founders had done from desperation and instinct, it had the courage to live by its wits.