It is the Summer of Love, 1967, and Hamish Keith is passing through San Francisco on a fact-finding trip funded by the cultural arm of the CIA. He turns on, tunes in, and takes notes. A “witchy folksinger” introduces him to rock sloganeer Country Joe, famous for his Fish and other four-letter words. He asks Keith what he does for a living. Or rather: “What is your bag, man?”

Keith returns from his four-month trip a changed man, though outwardly everything seemed the same: his job, his family, his ambitions. He has the title of a Colin McCahon painting going through his mind: Tomorrow will be the same but not as this is.

Had the “safe, comfortable and respectably smug art historian” become a hippie? Not quite, but Country Joe’s words were right – and wrong. Keith now realised that art had to “re-enlist” in the world, and he had to engage more effectively with the world using art and culture as his vehicle. As the title of his recent tour-de-force television series suggested, he could see The Big Picture.

His first step was to stand for Labour in the bluer-than-blue seat of Remuera in 1969, to put culture on the political agenda. The manifesto now seems prescient; co-written by ideas-tsunami Gordon Dryden, it championed tourism, electronic education and the “creative industries”.

At the ballot-box the campaign was a failure but it was flamboyant, challenging, good fun and talked a great deal of sense. The same words could describe this memoir, and there is no need for a re-count: Keith has emerged, of course, the winner. Native Wit captures him in full flight, at the dinner table and at the pulpit. One suspects that for this gifted raconteur, the dinner table has always been a pulpit, and we can sit back and enjoy the anecdotes, the aphorisms and the acerbic asides.

The title is just right, capturing his cheek and his nationalism. It comes from a school report, in which his Christ’s College teacher wrote, “Gets by on native wit unsupported by hard work.” It has got him this far, though Keith is self-aware enough to also the dedication to thank “Luck, Pluck and Impudence.”

He often talks about having “a conversation with art”; the good thing about art, or television, or a memoir, is that there is no one to interrupt the flow. Keith has been on the cultural stage a long time, and the solo show is his best format. 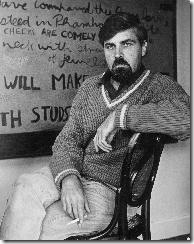 But there are walk-on roles for an extraordinary bunch of characters. Drinking partners range from Mama Cass – who helped keep sobriety at bay during an Atlantic crossing – to Colin MacInnes. The English writer of Absolute Beginners stumbled into Keith near Auckland’s Kiwi Hotel, 1960s watering hole to students and aesthetes. Did he know where he could find a drink, and some art? The evening finishes in Keith’s front yard, with the pair watering a lemon tree without a can, alongside Colin McCahon, Eric McCormick, Maurice Shadbolt and others. He hosts a soiree for Germaine Greer, gatecrashed by lesbians with Alsatians. At a London dinner party he pontificates about script-writing then, after a guest departs, asks who that was: he seemed knowledgeable. “Harold Pinter. He writes plays.”

There are scores settled, usually with humour, against bureaucrats, arts cant, vandals, philistinism and the occasional friend who let him down. Mostly he keeps his family out of it; of his first marriage he says, “Honesty is not a licence to wound anyone, but about my part in what happened I can be more forthcoming.” Early on his heart is badly broken, first by a Christchurch debutante who runs into him on her bicycle (“Sorry,” she says, “I was thinking in French”). Later, he is seduced by a flaky bohemian jazz singer: “I was a boy, I was in love”. They have a child, adopted out.

An alter ego emerges, the womanising Captain Macheath: “not a good role model for sustainability.” A hearty participant in the contemporary sexual mores, he rues the hurt caused while also looking back with languor: “I behaved wonderfully badly.”

Besides the repertoire of outrageous stories, the book is dominated by his love affair with art. He shares his enthusiasms – Colin McCahon, Rita Angus, Pat Hanly, Len Lye, Tony Fomison – and his passion is contagious. He speaks about art with such clarity, it is understandable that he has been so prominent as an advocate and agitator. The wilfully obscure arts apparatchiks may resent his high profile as gatekeeper and spokesman (chairman of the Arts Council in the 1970s, and of the futile “Heart of the Nation” exercise in 2000) but one of Keith’s main contributions has been his role as a plain-speaking devil’s advocate. He learnt to enjoy the pleasant sensation of having ideas that annoy people.

This is a life as a moveable feast, with a self-belief and cultural nationalism as its guide. During the journey he takes detours to expound on pet topics: heritage buildings, cars, committees, the vandalism towards Maori art (all that red paint), blockbuster exhibitions, sport as our national brand, state subsidies and also state miserliness. All accompanied by maxims, dropping like petals from a parade: Don’t get too attached to public art. Auckland teaches architecture but destroys it. When vision fails, process remains. Never let a good idea get in the hands of dumb people.

His current favourite epitaph is, “I told you it would happen but not in my lifetime.” Society hates a smart aleck, especially when they are right. Keith exhibits the self-assuredness of the self-made man (for years he has wanted to parody Ronald Hugh Morrieson with the line, “The day my father went bankrupt he enrolled me at Christ’s College”). But there is pathos to being a cultural early-warning system; at one point he asks, “Is anyone listening?”

A true conversation goes two ways, and now that this entertaining and provocative memoir has been produced, some may want a right of reply. That would be the response of a committee, and surely, Keith would argue, we are capable of something more creative.

(First published in the Sunday Star-Times, 14 September 2008. A transcript of Keith interviewing Pat Hanly in 1979 can be read at the Art New Zealand site.)

Every year as the advent of heavy rain and visitors overwhelmed it, the septic tank would overflow. The only people with the stomach to empty that concrete cesspool were Mum amd and I. It would end up under the citrus trees. Who loved it. They were bountiful. What price a slice of lemon from the piss of McCahon, McInnes, Keith?

Did you ever figure out who the mysterious jazz singer was? I'm reading Keith's book at the moment and have been racking my brains about this person, who gets quite a few mentions. I was part of the Wellingtom musos scene from a bit later in the 60s, and though I wasn't all that familiar with Auckland jazz then, I did know a few names. But I can't think of any jazz singers other than Mavis Rivers, who was probably working in America at that time.

No doubt she will turn up in some early 1960s gig listing. One regret with that review is I didn't manage to say how well written the Christchurch childhood sections are, I used all the space on the later stuff. Oh, and there's probably a good editor involved - but if they're doing their job properly they should be invisible. http://quoteunquotenz.blogspot.com/2008/12/that-is-so-2008.html