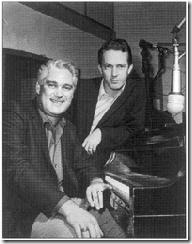 The New York Times edits an elegant sound montage of the musicians farewelled in 2008, and tells the story behind the most famous song by one of them. Lew Spence (below) composed ‘Nice ’n’ Easy,’ best known in its 1960 rendition by Frank Sinatra, although I prefer Charlie Rich's after-hours version from the late 1960s (Rich is seen here with the producer of it, Billy Sherrill). Spence's niece Toni Schulman described her uncle thus:

“He was very romantic. He loved women his whole life. He threw himself in over and over. When he met a woman he was attracted to, he was a goner. Once he met a woman wearing a green dress. There was no looking back. In the end, all he was left with was his song, ‘That Green Dress.’ My uncle had a very soft side to him, but he was not a cautious person. He was not nice ’n’ easy.”