I hadn't heard of Baird Bryant but he was responsible for one of the most gripping images in a documentary. There were 20 cameramen at Altamont, but he was the one who filmed Meredith Hunter being murdered by the Hell's Angels. Bryant's footage captured a moment that revealed Hunter was carrying a pistol. In a brilliant idea - which would give a PR agent conniptions now - the editor of Gimme Shelter Charlotte Zwerin suggested they show the clip to Mick Jagger, and film him while he watched it. When the violence broke out at Altamont, Jagger limply said to the crowd, "Who's fighting and what for?" The Angels, who looked like extras from Planet of the Apes on PCP, didn't take a damn bit of notice of the camp limey. Still one of the greatest music documentaries - it has a real, edgy narrative that builds to a climax, and terrific music - Gimme Shelter was the Maysles brothers' masterpiece, and not equalled until Dig. But Bryant, who died recently aged 81, did more than just hold a camera on that day: he shot the folk-rock doco Celebration at Big Sur and also the trippy New Orleans sequence in Easy Rider. In the 1950s he hung out with Ginsberg and Burroughs in Paris, drafted an early translation of The Story of O and wrote erotica. Celebration at Big Sur captures the sun setting on California hippies at a festival in 1969, with early footage of Joni Mitchell and CSNY, plus John Sebastian and Joan Baez; it's cut up into bite-sized portions on YouTube. But here is Bryant's most famous moment ...

2. Standing in the shadows

Elvis at a last supper with greaseball apostles, Little Richard as circus act, Jerry Lee Lewis in all manner of sleazy incarnations, the Beatles taking tea with the Queen ... these unforgettable images were by Guy Peellaert, the illustrator of the classic Rock Dreams, who died recently. His air-brushed, hallucinogenic portraits of the rock'n'roll pioneers said more than 1000 verbose rock critics. The captions were by the master of the one-liner, Nik Cohn,

and as Paul Rambali said, they were "a reminder that brevity is the soul of pop." A sample: "Sam Cooke. Sam Cooke, shot dead in a motel, was black but dressed up white, sang Soul but wrote Teendreams, wagged his ass but gently, with a certain deference." Peellaert spent three years on the drawings, Cohn just a fortnight on the captions, and it sold a million copies. (What took Cohn so long? His timeless rock history Awopbopaloobop Alopbamboom only took six weeks.) Jagger hired Peellaert to paint the cover of It's Only Rock'n'Roll, Bowie for Diamond Dogs (the dog/man's testicles were later painted out), Scorsese for the poster of Taxi Driver, Wim Wenders for Paris, Texas. Michael Herr (Dispatches) wrote the foreward to a Rock Dreams reissue. For a salon of cynicism, Peellaert was court portraitist. All the images from Rock Dreams are on his website, along with his other books.

3. Woke up this morning 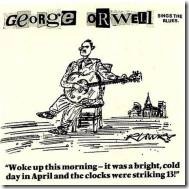 … and wondered who is killing the graphic artists of rock’n’roll? The third to go to the great inkwell in the sky is the NME cartoonist Ray Lowry. Over many years he took the michael out of solipsistic rock musicians and their fans, and thought up endless variations on the opening line of Robert Johnson’s ‘Walking Blues’. But his most famous piece of artwork is the cover of the Clash’s London Calling, for which he took a Pennie Smith photo of Paul Simonon smashing his guitar and turned it into an update of Elvis’s first album.

Lowry was the antithesis of the Art of Hypgnosis school of album design. This is the guy who once said Who cares if the next Genesis album is shrink-wrapped in the pope's strides and the shroud of Turin, it'd still be a turkey.

Lowry was one of the forces that used to drive me into Whitcoulls every Thursday for that 3 month old NME. t least Joe Strummer will have someone to sit around the campfire with.

I'd forgotten about the 3-month delay to get NME. People made careers out of being able to get them airmail.