In February 1984, Michael Jackson was primed to win big at the Grammys for Thriller, but had recently had an unfortunate accident – the first of a few, probably – during a video shoot for one of the album's many singles. His hair was set on fire, and it was uncertain that he would be able to attend. The Grammys were so unhip for so long that whenever they do get it right, it's a relief. They got it right with Lorde. Thirty years on from this story, I can understand why it took so long to shake off the feeling that it was for the old guard of the industry. 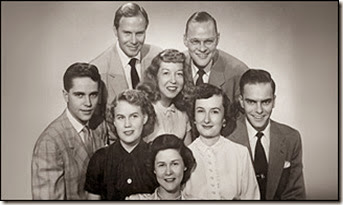 In the Grammys for 1967 (for recordings of 1966), Sinatra won the best pop vocal, and the Anita Kerr Singers (left) best pop group vocal – the Beatles did get an award, but not for Revolver. Paul McCartney took the Best Contemporary (R&R) Vocal for 'Eleanor Rigby', which was something the old guard could understand. (Pet Sounds also missed out, though it could be said that its innovations were only innovations in rock’n’roll: great melodies aside, it was a pastiche of techniques that had been used in mainstream pop since the early 1950s.  Older Grammy voters could see that.)

For years the likes of the urbane CBS president Goddard Lieberson held court; they were still hoping that rock'n'roll would go away, and musicals would once again reign supreme, or real vocalists like Barbra Streisand. In 1966, rock’n’roll – and the Grammys – were only about 10 years old. (Were they set up as a counter-attack, and last stand of old values?) They even cut out the rock'n'roll category for 15 years after 1966. This year, I noticed the rock category was completely dominated by has-beens or "heritage acts" such as Led Zeppelin or Neil Young. Now, I don’t care that rock was being sidelined; it has no lien on quality, originality or sincerity. So three cheers for Lorde who, unlike Beyonce, didn't need to f*** in public to get attention, or over-act like the pod-person Taylor Swift, who looked like she was faking an orgasm in a bad movie.

How to Win a Grammy

MICHAEL JACKSON will be there. That’s the latest news from Hollywood. Jackson may have to borrow Frank Sinatra’s toupee, but it’s essential he appears at the 1984 Grammy Awards. There can be no show without Punch.

The music industry last year was dominated so effectively by Jackson that without him the show would be rather empty. As it is, this year’s Grammys will be similar to our own record awards last November, when Dave Dobbyn seemed to stroll away with every relevant award. Jackson is eligible for 12 Grammys, having received a record number of nominations.

The last time an act dominated the year’s music so overwhelmingly was in 1964, when the Beatles invaded America. Who won the Best New Artist Award? The Bach-scatting Swingle Singers. The Record of the Year was ‘The Girl from Ipanema’, but wait – it gets more perverse. The Best Rock and Roll Recording was not ‘She Loves You’ or ‘The House of the Rising Sun’ – but Petula Clark’s ‘Downtown’.

The Beatles did win a Grammy that year,for the Best Performance by a Vocal Group. Ironically, the song which won them the award was ‘A Hard Day’s Night’, in a year when the winner for Best Motion Picture Score was Mary Poppins.

In 1966, just as rock music began to have some bite again, Rock and Roll was dropped as a Grammy category. But as the American rock writer Dave Marsh points out, “the travesties picked from 1962 to 1966, when ‘Winchester Cathedral’ was one of the victors, made it obvious that the Best Rock and Roll slot was a fraud from the start.”

There was no Rock and Roll category again until 1979, when a tuxedoed Bob Dylan collected his first Grammy for ‘You Gotta Serve Somebody’ – a gospel song. But then, the only Grammys Elvis Presley ever won were for his gospel recordings. ‘How Great Thou Art’ won twice.

Marsh is one of those who believe the Grammy Awards have an anti-rock bias. The confusing thing is that though the cynical may think that sales would be the only criterion that counted – and whatever one may think of rock as music, it does sell – rock music has invariably been snubbed.

But there is another irony. Popular music tastes and these days the mass market in America demands a heavier sound. Some critics suggest that it was Michael Jackson’s use of heavy-metal guitarist Eddie Van Halen which helped him break through the virtual ban on black music on the FM stations and the all-rock cable TV channel MTV. With the greater exposure, Jackson’s album Thriller went on to sell an estimated 20 million copies.

The Grammys are voted for by the members of the National Academy of Recording Arts and Sciences (Naras). The voting system is questionable – only active members of Naras can vote, but they only have to be active in the industry at the time they join. From then on, as long as they pay their fees, they can vote. Block voting and the trading of votes is not uncommon. “Many record companies,” says Marsh, “vote in wholesale lots, without regard for quality. This problem is endemic to industry awards.”

Of course, conflicts of interest also arise. In 1975, Janis Ian led the nominations, being eligible for five awards – and the producer of her comeback album was a past president of Naras. Albums ignored that year included Bob Dylan’s Blood on the Tracks and Bruce Springsteen’s Born to Run.

But there is a lack of interest in the awards among the US music industry, because the Grammys don’t really mean very much. Being nominated for, or winning, an Oscar ensures that a rerun of the movie will make money, but a Grammy does not mean a retailer will push on of last year’s albums.

Sales figures are central to winning the Grammy, but equally important is the need to be recognisable to out-of-touch Naras members. As with any political election, in the end, voters may choose not on the issues, but for the name they recognise.

This is how Christopher Cross won five Grammys with his debut album in 1981. The album had already gone platinum (two million units sold) before the Grammys, but more importantly, Cross had covered the TV talk-show circuit – collecting “exposure” as any good candidate should.

Classical music gets similar treatment from the Grammys. Itzhak Perlman’s talents as a violinist are equalled by his skills as a candidate. Perlman, who has won several Grammys in the past, and has four nominations this year, is a veteran TV talk-show guest who even appears on Sesame Street. Classical critic William Anderson comments: “Naras members vote not for the things they have heard but for things they have heard of, and all too often in a field where they are less than knowledgeable.”

THIS YEAR, Michael Jackson has had more exposure and sales than anyone. But he leads a strong field: his main opponents are David Bowie, the Police, Billy Joel, Lionel Richie and the Flashdance soundtrack. At the American Music Awards, in January, Jackson collected seven awards, winning every category he entered but one. In an upset, Lionel Richie’s ‘All Night Long’  won the favourite soul single award.

Of the candidates for the Best New Artist, Culture Club is the most “recognisable” amongst Big Country, Eurythmics, Men Without Hats and Musical Youth.

But why have the Grammys? Says Dave Marsh: “The Grammys ought to bring some artistic recognition to a form and an industry all too often seen as shallow and corrupt. For much of the public, the Grammys establish popular music’s artistic reputation. Yet the Grammys continue to snub art whenever it rears its head.”

First published in the Listener, 10 March 1984. The Grammys get it right more often than they used to – sometimes because a broken clock is correct twice a day – though there are still anomalies such as this year’s rap award going to the Pat Boone duo of rap. It’s easy to mock: there are thousands of new releases each year, and – despite the number of categories, which was only recently cut from over 100 to about 75 – every year, some future classics will miss out. But there is a lot of fun to be had going back and forth through the years starting with these results from 1966. But one wonders really what the rock-blinkered Marsh was frothing at the mouth about: weren’t the acts he was championing supposed to be alternatives to the establishment? As David Hepworth pointed out this week, in reference to this year’s Hollywood Reporter school photo of high-profile Grammy acts, “I look at this Grammy Awards line-up picture & think of all the past greats who would have refused to do it.” 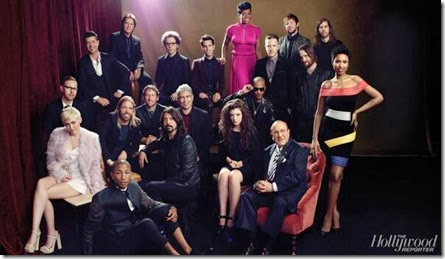