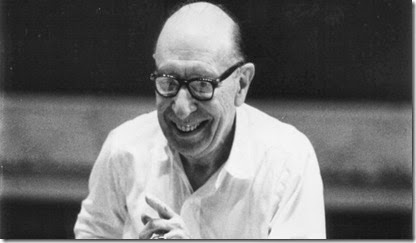 When Stravinsky visited New Zealand in 1961, Tom Shanahan had something better than a front row seat. As a member of the NZ Symphony Orchestra, and a photographer, he wasn’t looking at Stravinsky’s back when he conducted the orchestra, but his face. Shanahan was sitting with the musicians, ready to play his trombone. Luckily he took his camera along as well, and took some much used photographs of the Russian composer at work in the Wellington Town Hall.

Shanahan was a very keen photographer, who captured many images of New Zealand’s cultural history over several decades. One photograph – of musicians taken from above – was used on the cover of the first issue of William Dart’s Music in New Zealand (left). But he also took thousands of others that weren’t about music, including a set covering the Springbok tour in 1981.

Now, many of those images and negatives have been lost due to the fire – suspected as arson – at the Kilbirnie self-storage unit on Saturday. They were about to be given to the Turnbull Library for safe-keeping and use by future historians; now they are just one of many sad stories left behind by the fire, which ripped through one floor of storage units, and damaged those on another with smoke and water. There have been many pros and cons with the National Library and Turnbull’s shift to the digital age. The increased availability of its photograph collection at an affordable price is one of the best elements; the loss of the accessible books on the ground floor – most now need to be ordered from storage – is one of the most difficult to comprehend.

Last year the New Zealand branch of Fairfax sent millions of images to Arizona to be digitised by a private company. They will hold the originals, and digital copies will be able to be used worldwide. These images have been assembled from the newspapers that Fairfax has bought over the years, and are often the only tangible assets when the papers have later been closed down. The National Library was unable to reach Fairfax’s price. Luckily, before the desperation of media owners in the digital age, the newspaper company INL gave many of its images from the Evening Post and Dominion to the Turnbull before INL was bought by Fairfax. These photos can now be used at an affordable price, usually $20.

I worry about what’s happening to New Zealand’s other big archive of photos, that of the NZ Herald, Listener and many other publications, since they were bought by Bauer. Already these images had become difficult to access by historians, and at unaffordable prices. For example, in 2010 it cost $80 an hour to research a photo, and then $100 for the use of that photo in a book.

This has major implications for New Zealand historians: images of our culture are priced off the market. Authors pay for the images they use in a book, not publishers. So when an author is getting, say, $5 royalty on a $50 book, it will take 20 sales just to cover the cost of that single photo. What happens? The photo archives stay idle, unloved and badly treated by their proprietors.
It remains to be seen what the cost of accessing and reprinting a photo from Arizona will be.

Luckily a vast resource of historic images is being released on the net through social media. Their owners are only too happy to share the images, and some replicate those the publishing conglomerates are sitting on. (It’s understandable the companies protecting their copyrights, where legitimate, but often photos are given to them to use, but not returned; in some cases they were originally paid for by the taxpayer). But there is  nothing as safe as a public archive with its own programme of digitising to a high standard. And where the cost of usage isn’t prohibitive.

Both photos are by Tom Shanahan. The top image is from the NZ International Arts Festival website, the third image is from the NZSO’s website. It shows Stravinsky meeting members of the NZSO, among them the violinist and Holocaust survivor Clare Galambos Winter, on the right – the subject of an excellent biography by Sarah Gaitanos.
The NZSO website shares this anecdote by former principal clarinettist Alan Gold:


“When Stravinsky was here, conducting the end of part of Firebird, where the big chords are, he changed it, which was fine, we did it, and about 18 months later, we had another conductor doing the whole of Firebird, and when we got to the end of it, we played these chords short. The conductor, almost in despair, threw his baton down on his podium. “My God,” he said, “What are you doing that for? What jerk ever told you to play the thing like that?” And old Vince [Aspey – NZSO Concertmaster at the time] he just sat there and said, “Oh, it was some old Russian bugger called Igor, I think!”