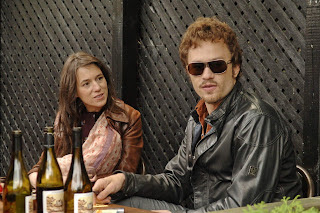 I haven’t seen many Heath Ledger films but he was always the most memorable part of those that I have watched. My first – and I had to look this up – was the tense caper flick Two Hands (1999), in which Ledger played a naive crim in debt to a violent crim (Bryan Brown). He loses a stash of money on Bondi Beach while going for a swim – shirt-off alert – and then has to find it before Brown’s character finds him. Ledger was one of the few of his generation who never looked like he was acting, he didn’t need to brood or emote, he was just there, real.

And unlike the Hollywood brats of the same age – and I was surprised to learn he was just 28 – he never seemed desperate to be famous. He just did his job. (The same couldn’t be said of his compatriot Michael Hutchence, who was addicted to fame and sex. Whereas Ledger’s death appears to be a tragic accident, Hutchence’s demise was – he’d hate this – uncool.)

Now, Ledger is destined to be a pinup for those that love handsome heroes who never grow old, although with today’s voracious media I don’t think he’ll be wallpaper for as long as James Dean.

Ledger’s most recent great film role will also stand up longer than any of Dean’s. In Todd Haynes’s I’m Not There (2007) he is one of six actors – among them Cate Blanchett and a young black boy – who play variations on a theme based on Bob Dylan. The film is a tour de force, with a risk-taking script that flits between “Dylans” (the character is never called that) at various stages of his career. The exquisite art direction also gets every period detail right, even the colour processing: the verite B&W of Don’t Look Back, or the rich, sun-drenched colour of Woodstock-era Dylan as captured in Elliot Landy’s famous photos.

It is a bio-pic, but not a bio-pic; like Dylan himself, the subject of the film is an invented, mercurial character. I’m Not There captures the chaotic, surreal lyrics of Dylan’s mid-60s heyday and flits sure-footedly between the six incarnations: a young Woody Guthrie, a retired gunslinger (Richard Gere), an amphetamined dandy in Cuban heels (Blanchett), etc.

Ledger plays a movie star, Robbie Clark, the straying, self-absorbed husband of a “Sarah”-like artist (played with compelling intensity by Charlotte Gainsbourg). They fall in love in Freewheelin’-era New York, enjoy a pastoral idyll in Woodstock, and fall apart with the inevitability – and architecture – of a 1970s Cheever short story, accompanied by Blood on the Tracks on the turntable.

The cinematic and Dylan references in I’m Not There are endless, and part of the fun. At one point the dialogue is from Nat Hentoff’s famous Dylan interview in Playboy from 1966; at another the soundtrack re-uses Dylan’s ‘Turkey Chase’ from his soundtrack for Pat Garrett & Billy the Kid. It’s a game that will be replayed often, like Cluedo.

But it’s not played for laughs; with its fastidious reconstructions and rewriting of a well-worn fable, this is The Rutles for Dylanologists. Whether it is for anyone else is a moot point: certainly the foppish Brit critic Anthony Lane missed the boat in The New Yorker. But Haynes captures the images evoked by the familiar songs; in the Richard Gere/Billy the Kid sequence, it’s like Fellini directing The Basement Tapes. And the music itself – most of it Dylan’s own versions, unlike the released soundtrack – segues and weaves with perfection and sensitivity. By ripping up the rules of the music biopic and throwing them on the ground before reassembly, Haynes has done justice to the sly chameleon who wrote Chronicles and created a classic of his own. 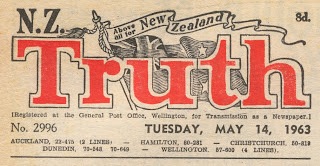 As part of the research for my current project I have been looking through 20 years of NZ Truth: 1943 to 1965.

It has been fascinating. The idea that nothing happened in New Zealand during the 1950s is a myth perpetrated by, I don’t know, Tim Shadbolt. It just happened behind closed doors after 6.00pm.

But Truth was there, looking through the tatty lace curtains for Reds under the bed, sly groggers, teenagers enjoying carnal knowledge (and many not), backstreet abortionists, petty bureaucrats and Cabinet ministers using government vehicles for their own purposes. (I love the one about the Minister of Transport’s young daughter using the Crown-supplied Zephyr to drive to work in Christchurch when there was a perfectly good bus service right outside her door.)

Cars were hard to get in those days, and so were houses. This is where Truth’s usefulness comes into play: bollocking the government for letting people sleep in car-cases, bollocking pub owners for refusing to serve Maori (take another bow, Christchurch). You didn’t get this in the Weekly News.

A recent comment on the NZBC site by poet Kevin Ireland – who made his own fun in the 1950s, much of it in Vulcan Lane's Occidental – seems apposite. He was discussing the current moves by Herald-owner APN to cut back the numbers of sub-editors on its periodicals. (Yes, it’s true. Soon Australians will be checking our spelling. Blame the Labor Party.)

Ireland points out that this has been going on for 40 years since offset printing first threatened the jobs of hot-metal typesetters. He saw it all happen in the 1960s and 70s, when Rupert Murdoch bought The Times, updated the presses and moved everything to Wapping. Ireland’s description of contemporary newspapers could be that of Truth in the 1950s, except there is very little entertainment coverage and most of the celebrities are British, such as the unlucky-in-love glamour-puss Princess Margaret:

“Fleet Street doesn’t exist any longer,” says Ireland. “The papers have gone and the whole bizarre Dickensian set-up with them. The miracle is that they lasted there so long. I got out just in time. What’s happening here with job cuts is what’s been going on just about everywhere else as newspapers have changed from being providers of hard news and political views to daily magazines of colour pictures decorated by shallow texts about murders, abductions, teenage drivers, dogs, fashions, personalities, entertainment, health issues, etc. Getting rid of the people who once maintained editorial standards is just another part of a certain-death process.”

More news as it happens from the files of Truth, a national treasure that never darkened the door of my parents’ house until one day in 1975, when it came wrapped around a cabbage. Meanwhile here is the paper’s editorial from 1953 after Hillary and Tenzing conquered Everest: 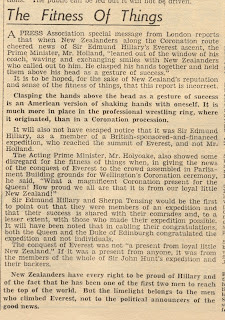 The Fitness of Things

A Press Association special message from London reports that when New Zealanders along the Coronation route cheered news of Sir Edmund Hillary’s Everest ascent, the Prime Minister, Mr Holland, “leaned out of the window of his coach, waving and exchanging smiles with New Zealanders who called out to him. He clasped his hands together and held them above his head as a gesture of success.”

It is to be hoped, for the sake of New Zealand’s reputation and sense of the fitness of things, that this report is incorrect.

Clasping the hands above the head as a gesture of success is an American version of shaking hands with oneself. It is much more in place in the professional wrestling ring, where it originated, than in a Coronation procession.

It will also not have escaped notice that it was Sir Edmund Hillary, as a member of a British-sponsored-and-financed expedition, who reached the summit of Everest, and not Mr Holland.

The Acting Prime Minister, Mr Holyoake, also showed some disregard for the fitness of things when, in giving the news of the conquest of Everest to the crowd assembled in Parliament Building grounds for Wellington’s Coronation ceremony, he said, “What a magnificent Coronation present for the Queen! How proud we all are that it is from our loyal little New Zealand!”

Sir Edmund Hillary and Sherpa Tensing would be the first to point out that they were members of an expedition and that their success is shared with their comrades and, to a lesser extent, with those who made their expedition possible. It will have been noted that in cabling their congratulations, both the Queen and the Duke of Edinburgh congratulated the expedition and not individuals.

The conquest of Everest was not “a present from loyal little New Zealand.” If it was a present from anyone, it was from the members of the whole of Sir John Hunt’s expedition and their backers.

New Zealanders have every right to be proud of Hillary and of the fact that he has been one of the first two men to reach the top of the world. But the limelight belongs to the men who climbed Everest, not to the political announcers of the good news.

Excellent Blog, working at the National Library of NZ the newspaper room was always one of the most illuminating I found, by the looks of it the Truth is a rather different beast now to what it was.