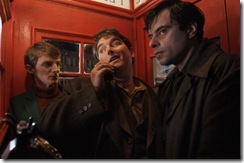 Home towns are often ungenerous places. I was reminded of this at a Wellington preview of Predicament, Jason Stutter’s debut feature made from Ronald Hugh Morrieson’s novel, published posthumously. Slow moving at first, it became engrossing and finished satisfyingly entertaining. It was beautifully shot (Simon Raby), with witty, careful art direction (John Harding; set dresser Amber Richards) and haunting, subtle music (Plan 9). The performances also benefitted from being underplayed (above, from left: Hayden Frost as the naive Cedric, bullied by Heath Franklin as Mervyn, and Jemaine Clement as the sinister, deeply bent Spook).

The audience – film industry types at different levels of involvement, degrees of separation, and envy – were cautious in their response. No, this wasn’t the premiere of The Rite of Spring: riotous enthusiasm or even anger would have been inappropriate. But a reluctance to be caught saying anything positive dominated the apres-fin atmosphere. Clement, they could bravely agree, was excellent. But the gothic element should have been cranked up, some said; the director was too faithful to Morrieson’s novel, mused others. And Predicament is Morrieson’s weakest, bluffed a few in response. While not a rollicking, flawless success like the lost-in-legal-space Came a Hot Friday, the film festival’s scheduler stuck his neck out giving Predicament such a prominent spot. It isn’t too hard to predict a long domestic tail for the film, and a fast-track future for its director. 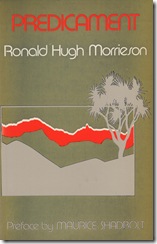 One who doesn’t have to bluff about his knowledge of Predicament is Ian Richards, New Zealand literature’s expatriate essayist. Richards, the author of the moving biography of Maurice Duggan, To Bed at Noon, has been quietly working away on his scholarly passions in Japan: deeply researched papers on New Zealand lit, and his short stories. The results can be read on his aptly named website No Frills New Zealand Literature. Like Walker Percy in his essay collection Signposts in a Strange Land, Richards has the knack of an irresistible title: ‘On Being a Provincial’, ‘Cycling for Safety: a Memoir’, and in fiction, ‘You Don’t Need to Be Married to Have Fun’, and – referencing Fairburn – ‘The Squalid Tea of Mercer’.

With no deadline, no set word lengths, and seeking little attention, Richards can take the time to get it right. He recently completed an epic essay on the novels of Ronald Hugh Morrieson and Ian Cross. The title isn’t up to his usual standard – ‘Two New Zealand Books: The God Boy and The Scarecrow’ – but perhaps he was tired. The essay stretches to 40,000 words, and is packed with riches. A risk-free prediction is that it will become a one stop shop for students, who are likely to be more generous than the gatekeepers of the past. (Even Morrieson’s academic champion, C K Stead, barbs his praise – as he does in Sam Hunt documentary, Purple Balloon and Other Stories. Richards quotes Stead: [Morrieson] “enjoys telling a story and tells one at least as grippingly as any novelist we have had. I suspect, even, that he is only fitfully conscious of doing more, and that all the rest happens largely by instinct”. He then follows up to describe the rich cultural background of Morrieson, suggesting his talents were no accident.) 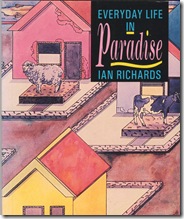 Be it Morrieson or Manhire, Richards is always readable, sharing his keen intelligence and insights without pretension. But if life seems too short to wallow in full-bodied essays occasionally longer then the original texts, light relief is offered at No Frills NZ Lit by Richards’s own short stories. On the website he features updated versions of several stories from his 1991 collection, Everyday Life in Paradise. Like Morrieson’s novels, they suffer from two unfashionable traits: humour and accessibility. The stories sparkle like well-cut, polished gems.