Like the Mutiny on the Bounty or the Kennedy assassination, the Titanic tragedy is a book publishing industry all of its own. There is even a Titanic app. The April 16 issue of The New Yorker considers the phenomenon, with an excellent piece by Daniel Mendelsohn. The subhead is “Why we can’t let go of the Titanic.” The one-word headline was so perfect I had to borrow it when blowing the dust off this review for the Listener from July 2011. 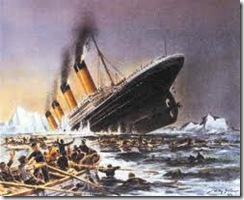 CELINE DION did not go down with the Titanic in 1912, singing ‘My Heart Will Go On’. Instead, when the call came to abandon ship just before 2am, eight able-bodied musicians stood on the rapidly slanting deck, performing ‘Nearer, My God, to Thee’. Around them, women, children and some of the wealthier passengers took to the few lifeboats provided by the White Star shipping company. The musicians were still playing as the ship went down, with one passenger recalling: “Only the engulfing ocean had the power to drown them into silence.” All eight perished, along with nearly 1500 passengers and crew.

When three of the musicians’ bodies were found several days later, bobbing among the icebergs, bandleader Wallace Hartley had his violin strapped across his chest. At his funeral, over 30,000 mourners crowded the streets of his Lancashire town, and his bandsmen were fêted as heroes. An orchestra of 500 performed a tribute concert at the Royal Albert Hall, conducted by Thomas Beecham, Edward Elgar and Henry Wood.

In anticipation of [this] year’s centenary, two books about the Titanic band have arrived simultaneously, with almost identical titles. Steve Turner, a popular-music biographer, concentrates on the band. Christopher Ward, a veteran newspaper editor and publisher, is the grandson of one of the musicians, so family comes first. Outwardly so similar, the books have differences that emulate the Titanic’s strict class structure. Turner is a stoker, working doggedly in the boiler room, while Ward is holding court in the first-class lounge, entertaining and enthralling with his family secrets.

As with the 1998 film version of this perennial story, there are clear heroes and villains. For both, the band can do no wrong. Turner’s villains are exploitative establishment figures such as White Star chairman Bruce Ismay (whose lifeboat seat was ensured) and the greedy booking agents who hired the musicians, lowered their pay and conditions, then charged their bereaved families for lost uniforms and sheet music. Ward unexpectedly keel-hauls his great-grandfather Andrew Hume: a violinist like his drowned son, Jock, but also a ruthless liar, bully and thief. Having driven his children from home with his regular beatings, Hume conned Titanic charities after the sinking and stole his granddaughter’s ­welfare grant.

Turner’s detective work exhumes fascinating details about the musicians’ lives, why they went to sea, and the importance of music in Edwardian society. On board the Titanic, the band and passengers had songbooks detailing 341 pieces that could be requested; musicians were expected to play waltzes, marches, airs, ragtime and opera selections. 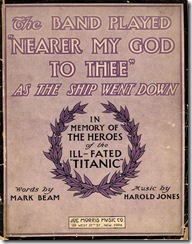 The sinking itself is told without drama, like a police report. Turner’s analysis of his research is watered down by qualifiers such as “likely”, “perhaps” and “would have been”. Although he says the evidence proves ‘Nearer, My God, to Thee’ was the final piece played, he undercuts it with doubt: there were several different melodies to those lyrics; such a dreary tune would have caused panic; and perhaps the last song was the current US hit ‘Autumn’ after all.

Ward’s book is compelling, with a novelised style and a clear focus on the best stories. His details are sharp-edged: appalling musicians’ contracts; a vast shipping line that bills relatives to transport bodies home; a grand piano that crashes through walls during the ship’s sinking, crushing a steward. The “women and children first” concept came from the Titanic, he reports, and he manages to include a crew mutiny and a captain called Haddock. Ward’s family saga gets even more dramatic after the Titanic sinking, when Jock Hume’s sister takes revenge on their dreadful father.