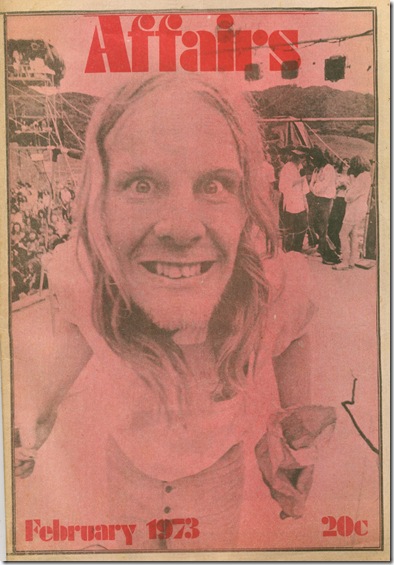 “Mike Flaws, guitarist with BLERTA, at Ngaruawahia” – from Affairs, February 1973.

Hoarding describes someone else, someone who collects Weetbix boxes and Dominion newspapers and has them stacked to the ceiling in the hall. Collecting surely is a different activity, done either with a view to future value or an unspecified research purpose. Whatever the definition, they’re still in the hall, or the ceiling, or the garage, and they’re in the way. The time has come to pass on – to the tip? One hopes not – a large collection of magazines and newspapers, mostly music related, that I’ve either acquired myself or have had passed on to me by collectors of an earlier generation. In particular, there is a major stash of US Rolling Stone magazine from the days when they offered roach clips as subscription bonuses, when Doug Sahm or Captain Beefheart could be featured on the cover, not Miley Cyrus. Most are from the cocaine years, the 1970s. There are also its imitators: Phonograph Record, Georgia Strait, and Bomp from the 1970s; Spin from the 1980s; and the inimitable Creem from its heyday in the early 1970s. Offers welcome.

Alister Taylor attempted a New Zealand Rolling Stone, which lasted about half-a-dozen issues in 1973. Most of the content was culled from the US edition, and they’re good issues. I don’t have those, but among many other things I have issues of Affairs, a short lived cultural affairs newspaper published by “Student Publications Ltd” at what was once Taylor’s address – Sydney Street West, Wellington. There is a photo spread of the Ngaruawahia festival by John Miller, Lauris Edmond on the recently departed James K Baxter, an essay by Baxter “Militancy in the Schools”, and a Jack Body essay that asks “Computers Composing Music?”:

“Why not? In fact there are a good many reasons why not. Nevertheless computers are used for musical composition – a paradox indeed … A computer could never compose as a human composer composes – simply because it is incapable of being irrational, moody, emotional, hard-to-get-on-with …”

There is no doubt that one painting stands out from all the others on the grounds of cost, size and standing in the artist’s achievement. This is the remarkable Gate 111 by Colin McCahon which, at 305 centimetres by 1071 centimetres, must be among the largest paintings permanently on display in New Zealand. The work is cognate with the famous gift to the Australian National Museum and stands as the supreme statement in McCahon’s preoccupation with this theme. It was of course a very special purchase made with the help of the Queen Elizabeth II Arts Council and its value has probably increased at least twenty fold since. But the important point is that such large works, if they are not acquired by art galleries, are outside the contemplation of the private collector. Only the institutional buyer has the space and the perspective to hang them.

Update: received this from Fane -

Thanks Chris what a weird thing I had no idea the mag existed! I must've been having fun - all those great bands and the only things I remember about that weekend was Mammal, Corben singing bollock naked and everyone laughing at Black Sabbath burning their stupid cross! Wish I'd paid more attention!