Fifty-one years ago today the last man sentenced to death in New Zealand was hanged. Walter Bolton was a 68-year-old Wanganui farmer who was convicted of slowly poisoning his wife by putting arsenic in her tea. Right until the end, he maintained his innocence. The defence claimed that sheep dip had accidentally entered the water system, and indeed traces of arsenic were not only found in the tea drunk by Mrs Bolton, but in Bolton himself and their daughter.
But when Bolton admitted to having an affair with his wife’s sister, it was all over. In just over two hours the jury emerged with the bad news. The judge placed a black cap over his wig and Bolton’s date with death was booked.
His execution didn’t go smoothly, however. It was claimed that instead of having his neck broken the instant the trapdoor snapped open, Bolton slowly strangled to death. Three years later, the death penalty was abolished (for the second time) by a Labour government. 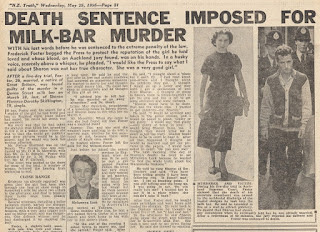 This picture, from 1955, shows how Truth reported the sentencing of Fred Foster two years earlier. He was the first of four men to be hanged that year. Foster was the “milk-bar murderer”, who stepped inside Somervell’s Milk and Coffee Bar, Queen Street, Auckland, and fired a shotgun into the face of Sharon Skiffington. She had recently broken off their brief relationship, and Foster couldn’t let go. So he met Sharon at a 1950s den of inequity – a milk-bar – and took his gun with him.
Earlier this month Poneke wrote a thorough examination of New Zealand’s history of capital punishment, in response to a recent poll that had found – what with all the murders this summer – 42 percent of New Zealanders would be happy to see a return to the gallows. Just prior to the Foster execution, Truth had reported that there was no shortage of applicants to fill a vacancy for executioner.
One of the most gripping radio moments I can remember was in 2002 when law professor, poet and raconteur Bernard Brown described being in an English courtroom as a death sentence was handed out. The cadaverous face of the judge as he pulled out his deathly doily ... the accused collapsing in the dock ... his wife shrieking out “No! No!”
Redmer Yska’s fascinating 1993 book All Shook Up covered the rise of the delinquent in New Zealand during the 1950s, the arrival of the teenager, Red scares, moral panics, deviant comic books and the emergence of rock’n’roll. Discussing the hostility to bodgies and the last heyday of capital punishment, he quotes Truth’s account of Fred Foster’s sentencing.
The condemned man’s last words were delivered in a whisper ...

“Foster leaned forward and grasped the front of the dock with a grip that whitened his knuckles. It was then that he made his appeal to the press bench and said that, ‘Sharon was a very good girl.’ ”

Petitions were organised, his mother came out from England to plead with the government, but to no avail. She arrived the day after his appeal was dismissed. Meanwhile, our justice system showed compassion: he went into hospital and had an operation that removed his inflamed appendicitis. But Attorney-General “Gentleman” Jack Marshall – with the fortitude he showed four times that year – refused to show any executive mercy and Foster was xxxx-ed.
Posted by Chris Bourke at 5:09 PM