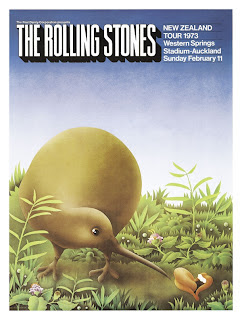 February 11, 1973: the Rolling Stones play Western Springs, Auckland, for the first time. Oddly, it was an afternoon gig because the primitive lighting equipment was too expensive to fly over from their shows in Australia.

Seven years on from their previous appearance here – when they wrote ‘Paint It Black’ in Auckland's Royal International Hotel, demolished in the 1980s – they were on a completely different plain. The Stones' personification of the dissolute, jet-setting rockstar was complete, and they had just peaked with their three best albums: Let It Bleed, Sticky Fingers and Exile on Main Street. Mick Taylor was playing lead guitar, and Hello Sailor's Harry Lyon is one of many who remembers his solos that day. A 16 year old friend hitch-hiked down to Auckland, took acid, and went on to have an international career as a guitarist, so this was a concert that changed lives.

At the time I was in my first week at secondary school 400 miles away, so there was no way I could have been there even if I was inclined. I do remember Wellington’s only pop station 2ZM was thrashing two songs that week, the Hollies’ ‘Air That You Breathe’ and ‘Magic Woman Touch,' and I was still in awe of the Beatles after finally hearing them in stereo on the Pye we got for Christmas.

The 35th anniversary of the gig is an excuse to share this timeless poster by Australian designer Ian McCausland – who is selling reprints from the original negs – and reflect on other connections the Stones have with New Zealand. They are the music story that never fades away; just yesterday the Sunday Star-Times told the exclusive story of the Auckland surgeon who put Keith Richards’ brain back together.

Thinking of that 1973 Auckland gig reminded me of ‘Best Intentions,’ a deliciously squalid short story by Bill Payne in his book Poor Behaviour (1994). Payne's first book was Staunch, a pictorial study of New Zealand gang life; he had started to write while he was in prison on drugs charges, and died in 2005 aged 53.

Pop culture journalist and researcher Andrew Schmidt includes Poor Behaviour in his list of the 10 best New Zealand rock books. He describes the story as a “barely fictionalised” account of a journey to the concert from Wellington, in which “Payne and his gang of junkie Stones’ fans burgle a chemist, OD, and get caught with a motel full of hard drugs, and make the concert. At least most of them do.”

Schmidt’s blog Mysterex is a treasure chest of underground Kiwi rock’n’roll history. It shows his flair for mixing deep research, his knowledge of garage and punk, and his love of gritty after-hours anecdotes from the wrong side of town. All these qualities were displayed in the two magazines he has been involved with publishing, Social End Product and Mysterex, and he shares much of the content from these collectors’ items on his blog. (The second Social End Product was never printed.) Like his friend John Baker, who was also behind Social End Product, he shows remarkable energy at tracking people down and recording their untold stories. 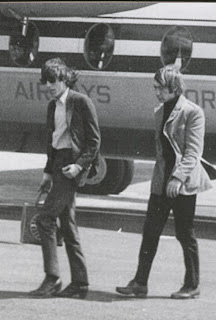 An example is his fascinating profile of Dave Hogan, who for years has been a leading blues harp player in Melbourne. But he grew up in Invercargill, and was a key member of the local R&B band the Unknown Blues, who got their name from a Pretty Things song after the UK band had passed through town. Shortly before the Prettys shocked Invercargill in 1965, the Stones had visited and Keith Richards famously described it as "the arsehole of the world”, which for some reason the city fathers have never taken up as a slogan. By a strange twist of fate, Hogan now plays in a Melbourne group with ex-Pretty Things bassist John Stax.

In 1965 Hogan was at the Invercargill airport in his school uniform to greet the Stones, with his mum as chaperone. This photo shows Bill Wyman and Charlie Watts coming off the NAC plane (the uncropped version also shows Ray Columbus's Invaders disembarking). It comes from another recent gem of New Zealand music history, 45 South In Concert, published by the Southland Musicians Club.

45 South is a very thorough scrapbook history of music from the deeper Deep South: Invercargill. It is in the style of Roger Watkins's When Rock Got Rolling (Wellington 1960s pop) and Hostage to the Beat (Auckland), but even more completist, going right back to dance bands of the 1920s. (With Gordon Spittle’s Beat Groups and Courtyard Parties evocatively covering 1960s Dunedin, Christchurch is letting its history down: a job for Jim Wilson?) 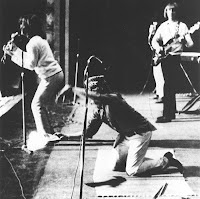 I have wanted to know more about the Pretty Things’ notorious visit to New Zealand since Ken Williams revived the story in the short-lived magazine Rock Express (like an amateur Mojo wanting to take on Rip It Up, it lasted five issues in 1979). In 2006 the hilarious book of the Pretty Things' tour arrived, Don’t Bring Me Down … Under, and it makes Spinal Tap look like the Osmonds.

But for a diverting few hours, check out Mysterex. The Sunday Star-Times may think it got a scoop with its catty story about the alleged bad debts of magazine magnate Barry Colman’s new girlfriend, but Mysterex got the real scoop: the story of Colman’s 1960s’ Rotorua R&B band the Plague.

I had always wondered what lay behind his quick decision to buy Rip It Up off Murray Cammick in 1994, when the magazine was still strong creatively but in trouble financially. A mix of business, generosity and romance, obviously.

Speaking of romance, congratulations to Flight of the Conchords for taking out the Grammy today for the best comedy album of 2007. One person who will be happy is Polly Vernon, who was beside herself with excitement interviewing them in Los Angeles for yesterday’s Observer.

“Jet-lagged and sweaty-palmed,” she wrote, “I enter the room of the hotel in West Hollywood, where the Conchords are waiting …” But Vernon realised that to go any further would have been unprofessional and risk angering the duo’s chic hometown chaperones:

While I was loitering in the hotel lobby, waiting for my allotted slot with Clement and McKenzie, I spotted two girls. Two good-looking, hipster girls, with excellent haircuts, sharp coats - and New Zealand accents. Two girls who, it transpires, are McKenzie and Clement's fiancées.

Roll over Isabella Blow and tell Versace the news.
Posted by Chris Bourke at 5:15 PM

your pages seem to have
lots of [if supportEmptyParas] stuff
scattered through them (at least in IE6) see http://chrisbourke.blogspot.com/2008/02/karma-chameleon.html

Thanks - yes it's only happening in Internet Explorer. I use Mozilla, but will have to investigate what's going wrong.