Staying with Memphis in the meantime, where it's Death Week in more ways than one. On August 17, 1977 I was on a bus going through Wellington when I noticed the Evening Post's billboard:

THE KING IS DEAD - Elvis Presley 1935-1977
The circumstances of his death meant that Elvis became a punchline for those with limited imagination, or fodder for semioticians who can't dance. Growing up in Wellington, the closest I got to an Elvis film were the trailers at the local fleapit. Just old enough to remember 'In the Ghetto' as a hit, in the early 1970s when NZBC-TV had a run of daytime movies - Loving You, King Creole and Jailhouse Rock - I suddenly got it. Later, even the post-army years.

In 1988, I made a 24-hour visit to Memphis, my first, driving up from New Orleans with Mike Howie at the wheel of a car that died in Elvis's carpark. After the article below was published, a woman from Taranaki wrote to say that she thought I was mocking Elvis, which wasn't the intention. To the visitor, Graceland is presented as an irony-free zone, and is a fascinating insight into the man. Surreal and sad at the same time.

A House On Lonely Street 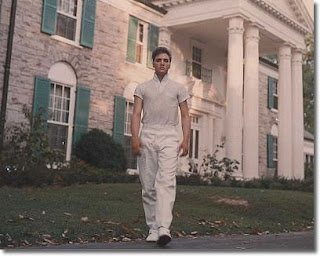