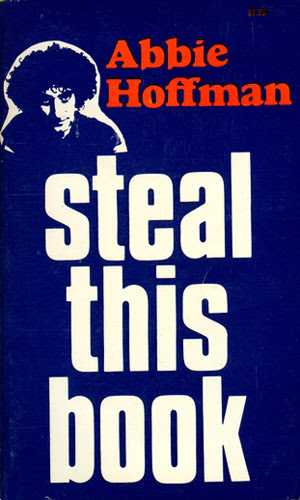 The hippest book in our high school library was Abbie Hoffman’s Steal This Book. It was funny, anarchic and full of subversive advice about how to get free petrol, food or even land in late 1960s Amerika. It also had great illustrations by Robert Crumb. Like Tim Shadbolt’s Bullshit & Jellybeans it is a classic of the counter-cultural era. It was well read at school – its philosophical contradictions didn’t occur to 14 year olds – and, for some strange reason, no one seemed to steal it.

There were soon claims – of course – that Hoffman himself had stolen the book from other authors. An anniversary edition gave co-credit to a writer/researcher, Izak Haber. Perhaps Hoffman was just ahead of his time; the “liberation of resources” concept of the book has spawned an imitator on the net, Steal This Wiki, and of course is now rife in music.

When it comes to plagiarism, the thieves will always get caught out. Unless you’re a politician pretending to be Jackson Pollock, though, it’s usually not something that makes the front pages. Academics have seen so many essays re-written they probably know some classics by heart. And good lines in journalism tend to stay in the brain, so when they crop up again without attribution, they get attached to the line in the memory, like a footnote. But those who spot it don’t need long memories any more, now that we have Google.

I have just read a convincing “gotcha” on this topic by Slate writer Jody Rosen: “Dude, You Stole My Article”. With meticulous research, he dissects the persistent plagiarism by a staff writer on a small (circulation: 20,000) “alternative” Texas weekly, The Bulletin. Also the disinterest from the editor when the claims and evidence were put before him.

Plagiarism isn’t a hanging matter, except perhaps in academia. Compared to some non-violent crimes, such as investment companies swindling their customers, or property developers and councils letting shoddy workmanship send people into debt and misery, stealing words doesn’t really steal the food out of the mouths of children.

But it does stick in the craw. Also in Slate, Jack Shafer lists “Eight Reasons Plagiarism Sucks”. It rips off the readers as well as other writers, undermines the credibility of journalism, and sees the thieves get promoted for the work of others (and five other reasons).

Music journalism is not one of the most respected areas of the trade, with good reason. But still, there are readers and advertisers paying for the work, and they expect some kind of honesty: in opinions and in methodology. I always remember my disappointment when I found out a line, ostensibly written by a trusted critic, came from somewhere else. Referring to the prevalance of “Astral Weeks helped pull me through” stories is a good line, and US writer John Grissim deserves credit for using it first, in 1972. Comparing Bono’s singing to the sound made by a “constipated stoat” was childish enough when the late Tony Tyler used it in his entertaining 1984 rant I Hate Rock and Roll, but why you’d steal it later rather than think up a fresh insult is unfathomable.

When new editors settle into a job, they get inundated with offers from freelancers who weren’t used by the previous incumbent. The new editors also often find themselves with an “empty cupboard,” so quickly over-commission to keep things moving, and deal with the consequences (of those eager freelancers) later. I once noticed that the new editor of a magazine was using a lot of book reviewers with unfamiliar names, and their bylines were about as believable as spam emailers. Their copy read like puff pieces, with meaningless adjectives a real critic would never use. So I got onto Google, and searched some of these phrases. They all lead directly to publishers’ websites.

When I called the editor about it he said, “Oh, I’ll have a word with those writers.” The magazine went on to win an award in its category, which shows how flaky awards can be, although it did reflect the hard work of the previous editor who had turned it into a magazine of substance. But an “award-winning editor” was on his way: thankfully, overseas.

Hi Chris, do you recall a certain Wellington writer who would take foreign album reviews for use in, I think, the Evening Post in the early eighties. Once purloined from the NME or whoever the name of the band and album would be changed. Rip It Up caught him out

Not on that paper, at that time, but I recall re-reading NME in other NZ papers in the 1970s and 1990s. And RIU commenting on the earlier example, years before I was there.

>> an “award-winning editor” was on his way: thankfully, overseas.

Thankfully? So he can undermine the reputation of NZ journalists overseas?

I wonder if Raoul practiced what he preached and stole that. And how many Situationists it takes to put in a lightbulb. But you did credit him.