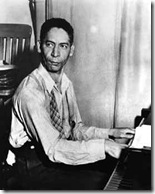 In the recent interview plugging his new album Together Through Life, Dylan was asked about the song 'Life is Hard.' Introducing his question, music journalist Bill Flanagan said, "It comes from a tradition that got pretty much wiped out by the popularity of swing and blues and rock 'n' roll. I remember Leon Redbone said once that the big break in 20th century music was not in the '50s when rock came in; it was when swing and jazz knocked off parlor piano ballads in the late '20s and early '30s. Do you ever wish that old style had stuck around a little longer?"

"Today," replied Dylan, "the mad rush of the world would trample over delicate music like that. Even if it had survived swing and jazz it would never make it past Dr. Dre. Things changed economically and socially. Two world wars, the stock market crash, the depression, the sexual revolution, huge sound systems, techno-pop. How could anything survive that? You can't imagine parlor ballads drifting out of high-rise multi-towered buildings. That kind of music existed in a more timeless state of life. I love those old piano ballads. In my hometown walking down dark streets on quiet summer nights you would sometimes hear parlor tunes coming out of doorways and open windows. Somebody's mother or sister playing 'A Bird in a Gilded Cage' off of sheet music. I actually tried to conjure up that feeling once in a song I did [on Shot of Love] called 'In the Summertime'."

"Randy. What can you say? I like his early songs, 'Sail Away,' 'Burn Down the Cornfield,' 'Louisiana,' where he kept it simple. Bordello songs. I think of him as the Crown Prince, the heir apparent to Jelly Roll Morton [pictured above]. His style is deceiving. He's so laid back that you kind of forget he's saying important things. Randy's sort of tied to a different era like I am." 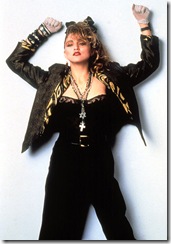 3. Some loser on new music

"Pop picking is a fast and furious business these days," said the liner notes on the Beatles' first album. In 1985, writing about the marketing of hit records, I commented on Madonna's presence in New Zealand:

[This year] her image seemed ubiquitous: clones wandered down Queen Street and haunted Manners Mall wearing lace gloves, corselettes and rosary beads, as the seamless melody of 'Into the Groove' flowed from boutique to boutique. Madonna was just this year's model. A new product to be promoted, sold, used, and - inevitably - abandoned.

I was today reacquainted with this prescient piece of tipsterology in A Foreign Egg in Our Nest?, Geoff Lealand's 1988 book on American popular culture in New Zealand. Unlike me, he had the wisdom to hedge his bets: "A year or so on, however, this prophecy has yet to be fulfilled for Madonna's records still make the New Zealand Top 20 and her fitful film career and personal life continue to be newsworthy. It is possible, however, that her light will dim in another year or two as the possibilities to ring changes on her persona (the Virginal Tart) become more and more limited; to be yet another half-remembered personality of the past. So far, however, she has persisted."

4. Stick to your knitting

In global headline news today, 24 years later, Madonna fell off her horse. I think I'll stick to better bets than pop picking, such as the new horse-racing phenomenon, the four-year-old Overdose. He has just won 12 races out of 12 starts; I'm on him for the second leg of the double at Budapest. “We didn’t expect anything from the horse when he arrived,” Sandor Ribarszki, the horse’s trainer, told the New York Times. The paper described Ribarszki as “a quick-witted joker who has called Overdose 'short' and 'kind of ugly.' Now Mr Ribarszki said he had trouble sleeping at night, wondering if anything had happened to the horse.”