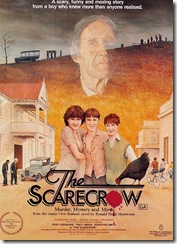 The Ronald Hugh Morrieson celebration that his champions – Sargeson, Stead, Shadbolt – had hoped for took place in the 1980s. After Goodbye Pork Pie, the fledgling New Zealand film industry knew what it needed in its scripts: humour, locally based. The 1982 film of The Scarecrow was disappointing, despite the cadaverous presence of John Carradine and the cute-as-a-button Tracy Mann. Three years later, Came a Hot Friday perfectly encapsulated Morrieson’s world, mainly thanks to bravura performances by Billy T James and expatriate-immigrant Peter Bland. Sadly, because of the production company Mirage going bust, Came a Hot Friday as a DVD reissue is lost somewhere in legal limbo. But its trailer can be viewed on the NZ Film Archive site, as well as The Scarecrow’s trailer.

In his 1971 Landfall essay, CK Stead did make a link between Morrieson and David Ballantyne, and he expanded on this in the introduction to his 2002 essay collection Kin of Place. The complete introduction is on-line, but this is the relevant passage, in which Stead looks back with no false modesty:

Both were writers whose work deserved serious attention and had not had it. In the case of Morrieson it needed only the double assault Frank Sargeson and I made in Landfall 98 (June 1971) to turn everything around in his favour. Morrieson the man was a ‘character’; his life story was picturesque; he was wild in his youth yet also frightened, home-bound, and soon a sad drunk; and his books were marvellously entertaining with flashes of genius. No threat to anyone, hugely talented but also manifestly flawed, he was, one might say unkindly, made for New Zealand, and has become (the more so because there is added piquancy in the recognition that it happened too late for the man himself to enjoy it) another of our literary icons.

Ballantyne also became a disappointed drunk, but one who kept up appearances, stayed employed as a journalist, and kept writing. No one (least of all Ballantyne himself) thought of his Maori grandmother as a ‘feature’ to be exploited. There was nothing to attract public attention except the novels themselves, whose only appeal was their peculiar honest homespun excellence - like the ragamuffin poor kid who wins the sprints almost unnoticed because he doesn’t have the gear and never behaves like a champion. Patrick Evans made a brave case for Ballantyne in Islands 31-32, even arguing (beyond anything I would have claimed for him) that his contribution to New Zealand literature was ‘at least the equal of Frame’s’; and Peter Simpson, who also wrote enthusiastically about Morrieson, has argued for more attention to Ballantyne’s work. But these appeals, it seems, have been ineffective, and the novels, unlike Morrieson’s, at the present date (2001) are long since out of print. It is to be hoped that a biography currently being written by Bryan Reid may bring at least Sydney Bridge Upside Down out of retirement.

Another passage in Stead's 1971 essay leapt out, about the character Billy T James later played in the film Came a Hot Friday:

“The Te Whakinga Kid is a grotesque. He wears a cowboy suit, carries a cap gun, lives by the fantasy that he is a Mexican bandit, and speaks accordingly … (Can one dismiss the Kid simply as an unreal comic device? After completing this note I read of a young Maori convicted of armed robbery who, it was explained to the Court, lived by the fantasy that he was New Zealand’s Ned Kelly.)”

This reminded me of a couple of things. Years ago in the Rotorua paper I read a court report of a young Maori up before a magistrate in Ohakune. His first name was Elvis, and he was getting busted for pot. Where, the judge asked, did he get the marijuana? Elvis replied: “I was walking along the street and came across these ski turkeys. They said, Do you want some pot? So these ski turkeys gave it to me.”

I hadn't thought of the stoned, Ohakune Elvis for a while, but the Te Whakinga Kid has crossed my mind a lot recently, as I've explored early country music here. He is the archetype of the country-and-western obsessed provincial youths who, inspired by Gene Autry and Roy Rogers movies, went down to their small town haberdashers, got Mum to sew on some fringes, grabbed a guitar and started yodelling. Not just Johnny Cooper, our first prominent rock’n’roller, whose original incarnation was as “the Maori Cowboy”. But a whole posse of them, all Pakeha. And, the evidence suggests, the dressing up was more important than the singing: there's something beyond fantasy going on here. Cooper of course is one exception; there are others, but more who made better photographs.

A couple of albums back I wrote that Dylan – his trademark whine reduced to a gargle – was singing like Bing Crosby with throat cancer. Attending a concert this week in London, Fraser Lewry says it now sounds like he’s trying to cough up his own blood. Listening to the new album Together Through Life, that’s about right. The album is an entertaining throwaway, and all the better for it: like an EP that Al Swearengen and some cohorts out of Deadwood have knocked off in the back room of a brothel. The funniest line so far is in the song with the tune borrowed from Willie Dixon and Muddy Waters: “I just want to say that Hell’s my wife’s home town.”

A friend has mentioned that he finds Dylan’s interviews gnomic. That’s true: the interviews are a rarefied level of Dylanology, inhabited by ageing academics and people on day-release. There’s even a whole webpage devoted to the subject: “The 10 most incomprehensible Bob Dylan interviews.”

And he has long since turned into the Duluth Kid.