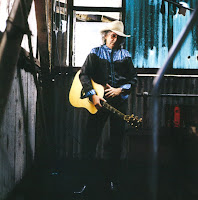 Ghost towns follow extractive industries as surely as night follows day. They're one-hit wonders that boom then bust, leaving only mess in their wake. No one should be surprised.

Nice, Chris. Dear old Al - yet another of our heroes who should be appreciated and honoured far more than they are.

Very cool Chris! And about time you were writing here again....

Greetings Chris
I just wanna say, I saw Al several times down in Hamilton in the late 60s, he as frontman for the Chicago Blues, Auckland-style, a la The Killing Floor. It was a big sensation for us Hamilton youff, that 6-piece from the smoke, with Henry Jackson on guitar and the two saxes, and the totally cool Al on the mic. They killed us. Obviously followed Al over the big divide to Merle and Townes and friends to the countrylife, although the Dead also had something to do with it. Have just rebought The Singer, wondering why it was missing from my collection for so long. Go Al. BTW, Chris, thanks for introducing me to Uncle Tupelo and Farrar and Tweedie on Nat Radio a few summer nights ago.
Mathew D (Wellington school of '77)

Thanks Mathew - would have loved to see Killing Floor. Al talked of Henry Jackson with a lot of respect. And he was an education in country music for me, too.