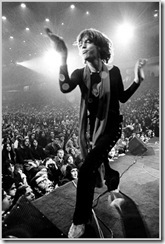 Mick seems almost entirely without vanity. … He hardly ever refers to his career or himself as a famous and successful person and you might be with him for hours and not know what it is he does. Also, he seems equally capable of group fun, clowning, entertaining, getting along with other people, and of entering into a serious one-to-one dialogue with anybody who wants to. He talked seriously but not at all pretentiously about Jung, and about India (he has a brother who has become a monk in the Himalayas), and about religion in general. He also seems tolerant and not bitchy. He told me with amusement that the real reason why the Beatles left the Maharishi was that he made a pass at one of them: “They’re simple north-country lads; they’re terribly uptight about all that.” Am still not sure if I believe this story.

David Kelly of the New York Times writes: “In the usual telling of that gossipy anecdote, the Maharishi made a pass at a young woman — sometimes it’s Mia Farrow, sometimes not — infuriating the Fabs. True or not, Jagger’s version is more appealing. As Christopher Hitchens says in his foreword to [Isherwood’s diaries] The Sixties, regarding this attempted seduction of an unspecified Beatle, “I wonder which one, don’t you?” Indeed I do, and I wouldn’t put my money on Ringo.”