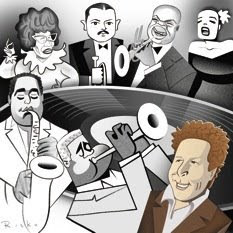 It’s written by the editor, David Remnick, who is so prolific he makes me want to have a lie-down. Besides editing the actual magazine – brilliantly – Remnick is quite capable of knocking out definitive pieces on Russia since glasnost, or the history of Israel, or a book on Muhammad Ali.

In the May 19 issue he profiles Phil Schaap, who is now 57 but has been a jazz aficionado since he was just out of naps. He shares his love for the form on radio:

Every weekday for the past 27 years, a long-in-the-tooth history major named Phil Schaap has hosted a morning program on WKCR, Columbia University’s radio station, called Bird Flight, which places a degree of attention on the music of the bebop saxophonist Charlie Parker that is so obsessive, so ardent and detailed, that Schaap frequently sounds like a mad Talmudic scholar who has decided that the laws of humankind reside not in the ancient Babylonian tractates but in alternate takes of ‘Moose the Mooche’ and ‘Swedish Schnapps’.

I had to keep re-checking that opening clause. Every weekday, just on Charlie Parker? Once a week, surely. No. Every weekday: that’s over 9000 hours of Parker. And this is at breakfast time; the programme is supposed to start at 8.20am and finish at 9.40am, but he always keeps the next DJ waiting. Schaap has information he wants to share. As Remnick continues:

… through his live soliloquies and his illustrative recordings, commercial and bootlegged, [Schaap] has provided an invaluable service to a dwindling art form: in the capital of jazz, he is its most passionate and voluble fan. He is … a master of history, hierarchies, personalities, anecdote, relics, dates, and events; but he is also a guardian, for, unlike baseball, jazz and the musicians who play it are endangered. Jazz today is responsible for only around three percent of music sales in the United States, and what even that small slice contains is highly questionable. Among the current top sellers on Amazon in the jazz category are easy-listening acts like Kenny G and Michael Bublé.

Schaap has one of those phenomenal memories that can seem pointless. As a child, he could name all the presidents of the US, in order. This was before he even attended school. “The precocious obsessive is a familiar high-school type, particularly among boys,” writes Remnick, “but the object of Schaap’s obsession was a peculiar one among his classmates. ‘The lonely days were adolescence,’ he admitted. ‘My peer group thought I was out of my mind.’ ”

But here is the difference: at the same freakishly young age Schaap was beginning to befriend the legendary musicians of jazz, and bring them home to meet his bohemian, academic parents. He knew their careers better than they did. Sun Ra once “kidnapped” him before Ra had to give a speech. He wanted Schaap to fill in the details of what Ra had done in his existence on Earth (as opposed to his life on Saturn).

I won’t give it all away. It has a lovely ending, and a link to some weirdly compelling audio of Schaap’s show.