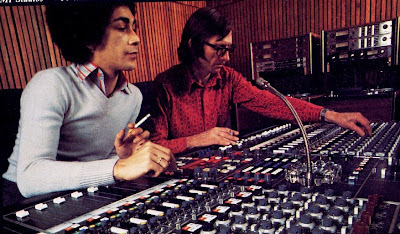 It was only in 1973 that HMV changed its name in New Zealand to EMI. This was right in the middle of its heyday as a company recording local music, as opposed to just selling overseas artists. Their local efforts had begun back in 1955 with the recording of Johnny Cooper’s ‘Rock Around the Clock’ and in the 1960s and 1970s the HMV studios in Wakefield Street, Wellington, hummed with activity. 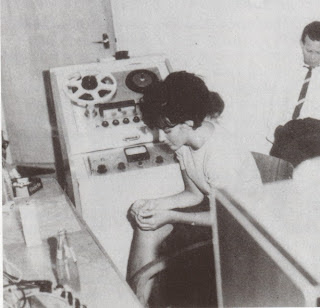 Maria Dallas listens to the playback of ‘Tumblin Down’, 1966. Above, Mark Williams at just the beginning of his life.

It was here – for its own label, and independents such as Viking – that Allison Durbin recorded ‘I Have Loved Me a Man’, Mr Lee Grant ‘Thanks to You’, the Fourmyula their minimalist ‘Nature’ and Shane his epic ‘St Paul’. Peter Dawkins gets a lot of well-deserved credit as a producer, but to everyone who ever recorded at HMV – Maria Dallas, Blerta, Nash Chase, the Kal-Q-Lated Risk, Fred Dagg, Daggy & the Dickheads, the NZSO, and countless others – one man was HMV. 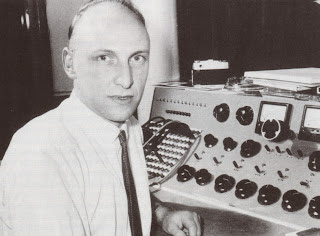 That was Frank Douglas, the engineer at the studio from its inception, when it evolved out of Lotus Studios. He stayed on during the studio’s ill-fated move to Lower Hutt in 1976, right to its closing in 1987. In 1992 Nick Bollinger interviewed him for William Dart’s quarterly Music in New Zealand. The article is probably the most thorough technical account of the HMV/EMI recording period. Douglas spoke of building the equipment, the arrival of stereo, the adding of more and more tracks. He discussed how they achieved effects like phasing, and the big productions of Durbin and the Avengers.

Other names that should be mentioned are the arrangers such as Don Richardson and Brian Hands – both of whom died recently – and Garth Young. HMV started to employ in-house producers; besides Dawkins there was Howard Gable (who produced and later married Durbin) and Alan Galbraith. 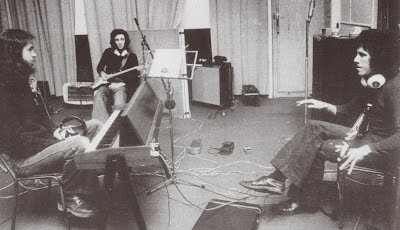 At left, Rockinghorse debates whose turn it is to get the Kentucky Fried. From left: Wayne Mason, Kevin Bayley and Clinton Brown.

Galbraith had the idea of employing a house band for all recordings: Rockinghorse. This band featured, among others, Wayne Mason (ex-Fourmyula) and Clinton Brown, both of whom were later in the Warratahs. Kevin Bayley was regarded as Wellington's leading guitarist at the time. Keith Norris was the drummer. They backed everyone from the Yandalls to Jon Stevens to Mark Williams, and their work stands up. However there is a big difference in the sound achieved at the old studio (think of the presence in Durbin’s big hit) and the new one, which was a much bigger room and had a new desk. There’s a thinness to the later albums, despite the playing. 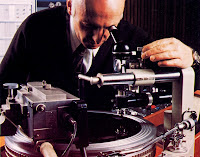 Douglas said the shift out to the Hutt ruined everything. Advertising agencies didn’t want to come out and record. “We had beautiful new studios out there but lost 80 percent of our clients in the shift. The management of EMI in England said it would make no difference. ... EMI at the Hutt became basically a manufacturing unit. We did cassette mastering, disc cutting and the odd recording.” Richardson told me that the Rowling Labour government's imposition of a sales tax also had a big effect on local recording (Muldoon later lifted it to 40 percent), but for a few years HMV eclipsed the efforts of Stebbings and Astor and other studios in Auckland.

Got here via Public Address. You're now bookmarked :-)

Wow, that took me back... I hadn't worked in the Wellington EMI studios but was involved with recording everything from commercials to a one-hit-wonder (my one and only outing as a lyricist) for a Telethon back in... 70 something.

To someone used to RNZ's old steam-driven on air studios (and even their multitrack setup in the old Broadcasting House) sitting in EMI's control room was like exiting a Cessna and entering the cockpit of a 767. Many times I'd lose track of what was happening in the studio as I marvelled at some bit of technology which would appear ridiculously obsolete now.

A lot of old radio gear is preserved in a museum... I wonder what happened to the stuff that was in EMI?

I think that desk is now at York St... man i wish we still had that studio in Wellington.

Oh yes I remember that old desk
Our old band the Fourmyula did a lot of recording there,with Howard and Peter producing I have fond memories of talking with all the other bands in the cafe,sometimes we would be called upstairs to Mr Wyness(?) office(the boss)that was scary.......
Martin Hope

What a great find! I was a young engineer at EMI Studios in Lower Hutt from 1977 thru 1980, under the guidance of Frank Douglas and Peter Hitchcock. I started my career with the NZBC in 1974, then after the time at EMI I moved to Marmalade Studios for a number of years.

One of my best memories actually was visiting EMI Studios when I was 14 (so that was about 1970), and that set my sights on what I wanted to do when I left school!

A few years later, when I did eventually work for EMI, Frank actually remembered our first meeting at the old studios 7 years earlier.

Frank was a wonderful man and a great mentor, so well respected by all who came through the studios.

John Said ...
Does anybody body have a collection or know of the whereabouts of any old recorded commercials made at the old HMV studios in Wellington. I had a very large collection of many 100's up until 20 years ago when I moved and the carrier lost the box with the bulk of the collection. Perhaps some tapes or discs of some description have survived. I would like to make these old treasures available through the Radio Heritage web site site.
If you can help contact me at jfraser@aussiebb.com.au

Hi, I am trying to find out which AMPEX 2 track reel to reel was being used at the old Wellington EMI studio by Frank. Does anyone know? Was it the AMPEX 440?