Wallowing in the 1970s and 1980s to dig the Rip It Up retrospective out of the archives tends to bring these things up.

When the news was announced that John Mellencamp would be touring New Zealand in December – for the first time, apparently – it was inevitable that my mind went back to when he first became known here.

It was a small but unforgettable story in Rip It Up, 30 years ago. John Mellencamp was an angry young man. He was 26, his career was going nowhere, he’d had a fight with his manager, and he had a wife, a seven-year-old and a 60-cigarette-a-day habit to support. And they wouldn’t even let him use his own name.

So when the mild-mannered reporter of a fledgling rock paper asked him the wrong question, Cougar - as he was then known - showed his claws. He went all Gordon Ramsay (the printer deleted his expletives), and to many people here, that’s how he was remembered.

Five years later he would have a breakthrough hit, he'd eventually get his own name back, and become the Walmart Springsteen of the cornbelt. But at this stage he hadn’t learnt one of the rules of rock’n’roll: be good to the people you meet on the way up, because you will meet the same people on the way down. 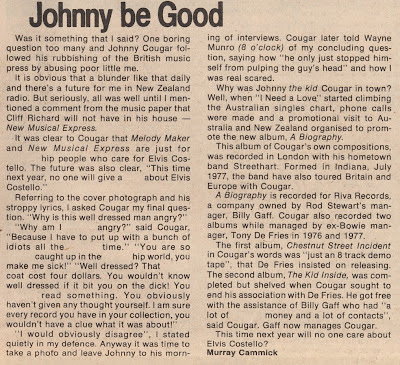 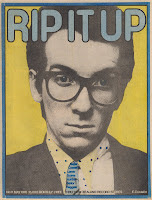 Left: the issue that caused offense, May 1978, and the eventual Cougar issue, September 1978.
What – no cover story?

The printer deleted it? That was very public-spirited of him/her. Hope they didn't bill for the service.

Yes, Putaruru Press. It was a different age. Wanganui Newspapers used to print the student papers at that time, and would often 're-edit' things they regarded as offensive. Still, it was an improvement on the 1951 climate, when even owning a Gestetner brought you under certain "emergency" regulations.

Once a prat, eh? What about his pulling out of the Mission Concert earlier this year because - supposedly - he was being inducted into the Rock and Roll Hall of Fame? What a tit. Still, Tom was much better than Johnny-John will ever be.

A quarter century on from his only big hit, Mellencamp always seemed an odd choice for the Mission gig, though it is a captive audience. Tom Jones was a far better bet for the chardonnay chav crowd. At the time the Dom-Post was raving that Mellencamp's original support act Elvis Costello would help sell the tickets, which I thought was coming from the same dream land that saw Costello booked as headliner for the failed Sweetwaters. Sheryl Crow will be pulling more punters in this new double act, I suspect. None of these three could now full a big room here on their own.