The Devil made me do it. Or Doubting Thomas, at least. In July 1989, I was in Memphis, and the local newspaper said that Jimmy Swaggart was holding a crusade in a local venue. It was the first time the controversial evangelist had appeared in the city since his fall from grace a year earlier. 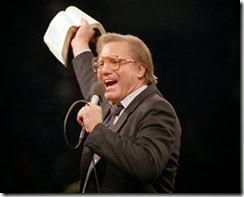 The leader of the Jimmy Swaggart World Ministry – which at its peak took in USD $150 million a year – had been caught in early 1988 making his regular visit to a prostitute in a New Orleans motel. “He was cheap, but he was quick,” the woman later said of her illustrious client, who never tipped or stayed more than 15 minutes.

Swaggart was exposed by another brother of the cloth. It was an act of revenge. His accuser, a man with a rival TV ministry, had made the mistake of confessing to Swaggart of an affair with one of his flock. Swaggart passed this on to the executive of the Assemblies of God, who swiftly defrocked him.

When Swaggart's sins came to light, the Assemblies of God executive revoked his preaching license for a year. After three months, Swaggart defied them, and returned to the pulpit. He too was defrocked, so the Jimmy Swaggart World Ministry split from the Assemblies of God to evangelise alone. Well not quite alone – 1500 people worked for Swaggart, many from the $1.5 billion World Ministry Headquarters in Baton Rouge.

Some would say it was a just reward for Swaggart. When Jim Bakker, his main competitor in the televangelism business, had fallen amid scandal, Swaggart had damned him as “a cancer that needed to be excised from the body of Christ.”

No one falls so heavily as a moralist caught with their pants down. But if a sinner wanted to beg for forgiveness (and money) the Lord said we must listen. It was my duty to attend the Jimmy Swaggart Crusade. I might even be saved.

The neatly blazered ushers told me the ground-floor was full. So I took another entrance, and found they were telling fibs. Half of the 4500 seats were empty, but I could see why they’d wanted me upstairs. The meeting was being filmed for broadcast on a Swaggart TV show, and in my day-glo striped shirt I stood out like the proverbial pork chop in a synagogue.

The faithful seemed to be either elderly couples, with hard-­bitten faces out of Steinbeck, or chubby middle-agers. Beside me was a bouffant blonde – hair and nails lacquered like Tammy Wynette – with her husband, in Elvis quiff and sideboards. There were only half a dozen blacks in the hall.

On stage was a man in a 1940s double-breasted suit: Swaggart’s son Donnie. Before the main event, he was selling records, books and salvation. Everything seemed to be going cheap. “Prophecy packages” were down from $52 to $30, “prayer packages” from $40 to $20. It was an “urgent appeal”, with all the proceeds going “to defray the operational costs of the Swaggart child-care ministries” in Africa.

A choir and a six-piece crusade band entered to warm up the congregation. The crowd was ready to Hosanna! as Swaggart entered, looking like Keith Quinn on a mission from God.

For the first couple of hours, the crusade was more concert than church service. The music was white-bread gospel, lively as a funeral parlour, but the response was instantaneous. The congregation threw its arms in the air and cried, Amen! The rows of people started swaying, clapping in unison and stomping their feet. Hands were held aloft and eyes firmly shut as the fires of Pentecost descended, ignited with natural gas precision.

After a dozen Christian pop songs, it was time for business. I waited for a breakout of glossolalia, but there would be no speaking in tongues tonight — Jimmy would do the talking.

But there was a curious lack of fire and brimstone from the man who once described himself as an “old-fashioned, Holy Ghost, heaven-sent, Devil-chasin’, sin-killing, true-blood, red-hot, blood-bought, God-given, Jesus-lovin’” preacher. The soul-saving clichés rolled off his tongue, but Swaggart quickly moved to the main item on the agenda. The way to save souls was to save Swaggart’s TV “stations” (actually bought air-time on Memphis channels). They were in trouble.

“I don’t know how much the debt is, or what the stations are called – but we need the money to keep saving souls. If you want to save souls, every dollar will go towards these stations, here in Memphis.”

Ushers appeared with plastic buckets to pass along the rows of people who have whipped out their greenbacks. Then Swaggart upped the ante:

“We have a gift for those who give. These beautiful family Bibles. At home we always have a Bible open on the coffee table. These Bibles will go to anyone who comes up with $100.”

A pallet-load of silver-leafed Bibles had silently been wheeled out. Immediately a queue formed. The band was playing, the choir singing; it was communion. The faithful parted with their cheques, received a Bible, then shook Swaggart’s hand. Twenty-seven Bibles, cheques and handshakes later, the Swaggart debt was eased by $2700, not counting the plastic buckets which were filling rapidly. And this was just the first of a three-night season in Memphis. “By Sunday this place will be burning!” said Swaggart.

He brought his wife Frances forward to do a few fundamentalist numbers. She sang about being saved, saving souls, and feeling wonderful, but her voice quickly became ragged and incoherent. So Jimmy sat down at the piano.

He dedicated his first number to his cousin Jerry Lee Lewis, a soul certainly in need of saving. “We had dinner together last night – corn, ham, potato salad. He would have been here, but he had to go to Canada.”

Rock’n’roll may be inviting “the powers of darkness, the demons of evil”, but Swaggart’s piano runs were straight from the Jerry Lee songbook. Soloists stepped forward from the choir: a redhead to sing country, a young black man singing gospel more like Charley Pride than Al Green. The crowd was ecstatic.

From the piano Swaggart said, “We are all tempted by the Devil, I am, you are ...” It was an oblique reference to his disgrace, but in mid-sentence he changed tack. It could have been Jerry Lee talking: “I know there will be a journalist here, and I know what they’re going to write about me. But I want them to write about you – all your happy faces.”

I was indeed surrounded by happy faces.

The first of a six-part series, written in 1990; part two is here. This particular part was unpublished. In 1991, two years after witnessing Swaggart’s comeback, Swaggart was caught driving on the wrong side of a Californian highway, with a prostitute as his passenger. And this syndicated story appeared in the New Zealand Herald: 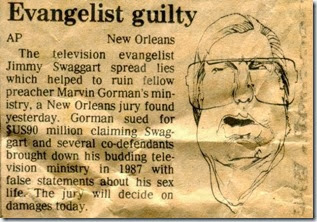 Twenty-four years on, Jimmy Swaggart Ministries prospers, its fervour undiminished. Swaggart’s official biography is here, and an alternative one is here. His official TV channel the SonLife Broadcasting Network can be viewed here, and illustrates the evangelical experience well. There are many Swaggart music clips on YouTube, most slow-tempo religious ballads. But for historic interest, his live-on-TV confession in 1988 is worth seeing also: