My review of Stranded in Paradise appeared in the Listener’s 50th anniversary issue, 1 July 1989. The use of a plural verb after “trivia” is surely the input of the literary editor, Andrew Mason.

NEW ZEALAND rock’n’roll, according to John Dix, began in 1955 when Johnny Copper, “the Maori Cowboy”, was asked to record Bill Haley’s ‘Rock Around the Clock’, then making waves in the States. Cooper couldn’t under­stand what the song was about, or even grasp the rhythm. His backing band of Wellington jazzers struggled to play on the beat, and Cooper muffed his lines. And when New Zealand’s first rock’n’roll record was released in October, 1955 – before anything similar had been done in Australia or Britain, claims Dix — the public couldn’t understand it either. Selwyn Toogood gave it a couple of spins on his Lever Hit Parade, but the record bombed.

They had a go, nevertheless, and that is what this book is all about: New Zealanders struggling against the odds to express themselves. John Dix has shown the same tenacity with Stranded in Paradise. For eight years there has been talk of “the book”, with sceptics doubt­ing it would ever appear. After the first two publishers dropped out, Dix finally published the book himself, with the aid of two friends. New Zealand’s rock indus­try has always been a do-it-yourself business, and this book pays tribute to the doers. 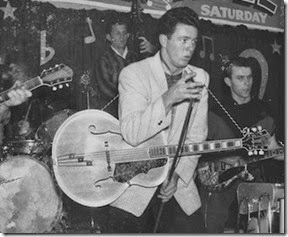 Stranded in Paradise is an encyclo­pedic, entertaining work, full of stories of heartbreak and heroism. The title comes from a Hammond Gamble song: “Stranded in paradise, how can a poor boy break the ice?” Tim Finn has called it “the tyranny of distance”, Dave Dobbyn a “strange itinerary”. The frustrations of isolation are the essence of the book, It begins with the first adolescent who wanted to break out of “normality” and small-town aspirations: Johnny Devlin (above). The bank clerk from Wanganui quickly went from talent shows to town hall tours, selling a phenomenal 250,000 records in a career that peaked after 12 months.

A pattern quickly emerges: the few acts that are successful “conquer New Zealand, chalk up a few hits, and set sights further afield”. Usually on Aus­tralia, where New Zealand musicians from the Invaders to the Enz, Mi-Sex to Jenny Morris, have had considerable impact on the industry.

Dix brings alive New Zealand in the 1950s, a stultifying world of six o’clock closing, short back’n’sides and Pat McMinn on the wireless. Devlin’s flame extinguished in 1959, the country settles back with safe Howard Morrison until the Shadows, and later the Beatles, inspire the beat boom.

The book is full of long-forgotten bands and songs, but the period details and cautionary tales make it a very readable history. The Chicks as young teens visit their West Auckland neigh­bour Peter Posa for his autograph. They sing him a song, and within days are in a recording studio. The Avengers (‘Love Hate Revenge’) play a gig in Nelson on Sunday night, catch the Picton ferry to Wellington, drive to Whangarei to play on Tuesday night, then back to Lower Hutt to perform on Wednesday. The Fourmyula win a trip to Britain in a talent quest, only to find they have to play their way there – and back – on the ship.

The trivia are fascinating. The vocalist of Simple Image (‘Spinning Spinning Spinning’) later sang with Frank Zappa. Shane (‘St Paul’) spent the 1970s in England, singing with a heavy metal band. Mr Lee Grant was born Bogdan Kominowski – we knew that – but in a Nazi concentration camp?

Dix doesn’t pull his punches when musicians are the architects of their own downfall, succumbing to ego, drugs or, worse, a cabaret career. He has been writing about Australasian music since the 1960s, and has been in the right place often enough to give the book authenti­city and energy. He’s a born raconteur, and chapters on the rise and demise of such self-destructive units as Dragon, Hello Sailor and Toy Love, to whom Dix was particularly close, are some of the best. The desultory years of the 1970s, when local pop was dominated by MOR acts and most live bands were pub residencies doing cover versions, are quickly by the post-punk resurgence in New Zealand rock’n’roll.

Only a rock obsessive could have completed this book, with its band genealo­gies, obscure songs and forthright opinions. The enthusiasm is contagious, even if the fan in Dix gives his heroes – Max Merritt, Bruno Lawrence, Rick Bryant, Chris Knox – an aura of mytho­logy, and the tabloid punchiness of the writing is sometimes over the top (Max Merritt’s Meteors were as welcome in Sydney “as a busful of lepers”; Kevin Borich’s guitar playing “bit like a Queensland crocodile”; the Rumour’s “pap had wheelchairs positively burning rubber on the way to the record stores”).

Recurring themes include the reluc­tance of New Zealand’s broadcasting media to reflect their local culture, and the bland-out that occurs when they do get involved; also the chequered history of major record labels’ contribution to local music. Despite this, the valuable appendix of New Zealand acts in the charts since 1966 is testimony to what has been achieved against the odds.

The dominance of imported pop has stifled the creation of our own music. Pride in our culture is just something Michael Fay can exploit, and Mike Moore can market. Stranded in Paradise has given us our musical heritage. Let us hope that it will inspire our musicians, radio and television programmers – and their audiences – to keep on forging our own cultural identity.