Part five of a six-part series.

We awoke to find the boat berthed at Vicksburg, and waves going up the Mississippi. This curious phenomenon is caused by Hurricane Chantel, blowing north from the Gulf of Mexico. 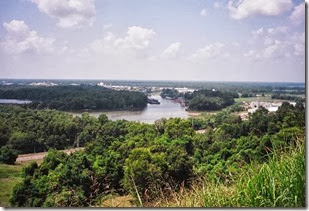 Vicksburg has a habit of bucking the system. Our first sight in the small city was of the mayor, helping out a visitor by breaking into his car. Although Vicksburg (pop: 25,000) is in the heart of the Deep South, its mayor Robert Walker is a black man who won by an 80 percent margin. Much of his support came from white, elderly voters.

“Race relations are very calm here,” said our guide Stacy Douglas, with a refined Southern accent. Vicksburg has always been more easy-going than other Mississippi towns, the river saw to that. Carousing boatmen last century could always find a drink or a card game here.

The locals even welcomed the filmmakers of Mississippi Burning. “They needed a liberal town,” said Stacy. “They’d been turned down in over 50 Mississippi towns.” But like post-war carpetbaggers, the outsiders were “hell to work with. Very haughty.”

Vicksburg is a place that has always adapted to its circumstances. When the Mississippi changed its course away from the town in 1876, as it occasionally does, Vicksburg didn’t die like so many others. The locals responded by diverting the nearby Yazoo River back towards the town so the Mississippi steamboats could still visit.

Its economy seems to be thriving while other towns in Mississippi experience recession. A disproportionate number of PhDs live there, thanks to various projects of the federal government, the city’s largest employer. The Army Corps of Engineers test everything from tidal waves and river flooding to nuclear weapons.

Despite this, over a million tourists a year visit Vicksburg. They come to remember the Civil War. Because of its geographic location – it sits high on a bluff overlooking the Mississippi – Vicksburg played an essential role in the war. Whoever held Vicksburg had control of the river, so the battle for the town was one of the most grueling of the war. 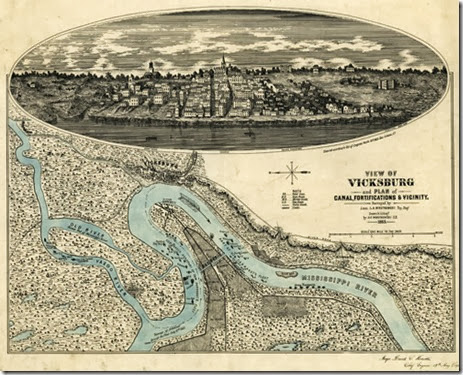 The terrain tells the story as vividly as a war gamer, and the battle is studied to this day at Westpoint. The hills around Vicksburg made it difficult to take quickly, so General Grant resorted to siege warfare. He surrounded Vicksburg with troops, dug 15 miles of trenches, and bombarded the town with cannon fire from the hills and gunboats on the river.

For 47 days the town held on, with 30,000 Confederate soldiers defending against 75,000 Union troops. For six weeks the townsfolk lived in caves as, in Twain’s words, the “sky was cobwebbed with the criss-crossing of shells.” Eventually, after 23,000 soldiers had lost their lives, and with the town cut off from supplies, Grant starved Vicksburg into submission.

In a cruel irony, the town surrendered on the 4th of July, 1363 – Independence Day. Vicksburg didn’t celebrate the national holiday for nearly 100 years. “It’s still not a very big day,” said Stacy. “This year the Mayor thought his councillors were going to organise it, and vice versa. So nothing happened.” 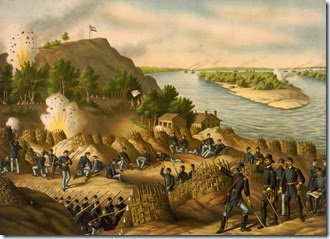 Vicksburg had been a reluctant rebel in the first place, voting against Mississippi splitting from the Union, and now the town was devastated. These days the battleground surrounding the city is a lush, 1700 acre national park, with opposing trenches and cannons placed so close to each other that the soldiers could hear the conversations of their enemies at night. The horror of hand-to-hand combat is almost tangible, and it’s a shock to realise the Civil War is such recent history: the last Confederate veteran died in 1959, the year I was born.

At the Walnut Hills restaurant lunch was served family style. The lazy Susan on the round table was groaning with plates of Southern soul food – fried chicken, okra, butter beans, black rice, coleslaw and corn bread – and as they were being passed around Stacy related some happier anecdotes from Vicksburg’s history. 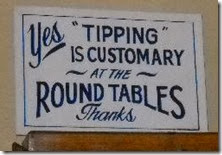 Here, in 1894, a beverage called Coca-Cola was first bottled. And a few years later the town gave birth to the teddy-bear, after a visit from President Theodore Roosevelt. His hosts had taken him hunting, and offered him a bear cub to shoot. But it was tied to a stake, so Roosevelt declined, and a cuddly toy got its name.

“Poor Vicksburg,” sympathise the people of Natchez, “they lost all their buildings.” Natchez, about 70 miles downriver, was left virtually untouched by the Civil War. So it has 500 antebellum homes, many of them mansions built by cotton barons who had their plantations over the river in Louisiana. Now, its main industry seems to be the Old South; it is often the backdrop to plantation mini-series on television.

“I’m taking y’all to Auburn,” said our host Rhonda Souderes with a singsong lilt. She looks and sounds like the archetypal Southern belle. Hollywood has stereotyped the Southern accent as something crude and unsophisticated. In fact, it has countless regional variations, always sounds lyrical and often cultured. 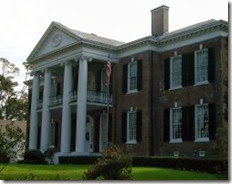 Auburn turns out to be a Southern mansion right out of another Hollywood stereotype. Built in 1807, it’s a vast red brick home, with a colonnade of four Corinthian columns, set in a garden of oaks dripping with Spanish moss. Impeccably restored and full of Regency antiques, it now functions – like many Southern mansions – as a bed-and-breakfast guest house.

But you might be unmoved by the opulence inside: the rococo mirrors, Waterford chandeliers, Mallard four-posters. For this is the slave economy staring right at you. Auburn needed 27 servants to operate; its owner, a local doctor, also owned over a thousand slaves. 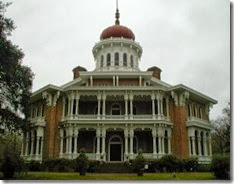 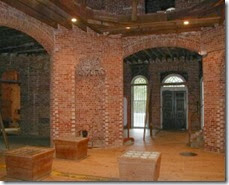 The wealth of the plantation elite – just a few thousand families – created an ostentatious building boom to emulate the indulgences of the European aristocracy. Another Natchez home, Longwood, almost rivals the Taj Mahal, and has a pathetic tale to match. Built by another cotton baron/doctor, it’s a six-storey castle topped by a huge turret and onion-shaped dome. It was to have 32 rooms, but only the outside and bottom floor were finished when the Civil War interrupted. The builders downed tools and headed north to join the Union army. Although the owner-was a Union sympathiser, his 23,000 acres of cotton fields were burned or confiscated during the war, and he never had the money to finish Longwood. Heartbroken, he died before the war was over, and his family lived on the bottom floor for the next 100 years.

The history of Natchez seems to be bound up in the failings of human nature: greed, lust, racism, murder. The area’s first inhabitants, the Natchez Indians, had been slaughtered by the French, and since then the district had been fought over by the British, Spanish, and American pioneers.

We’d been told of a famous old whorehouse called Nellie’s that sold souvenir T-shirts. Arky was keen to go there, to buy one for his wife. Rhonda wasn’t. The “historified” bar we’d expected, maybe with giftshop attached, turned out to be a rundown clapboard bungalow. Arky wasn’t shy, so I tagged along. “Y’all remember I’m on my own,” sang Rhonda, locking the car doors from the inside.

We walked through a screen door into a house as cluttered as Miss Haversham’s. Sitting at a kitchen table were a large black woman and a pale, skinny white girl. Five small dogs yapped around them. All were having lunch, but the girl was in her underwear. She had peroxided hair, a large tattoo on her protruding shoulder blade, and was all of 15. “Can I help?” she said.

As Arky paid for the T-shirt, he asked “How’s business?”

“Oh, good,” she replied brightly. “I’m here on my own. I’ve only been here since Saturday. Two more girls are supposed to come up from Mobile tomorrow. Most of the business is selling T-shirts.”

We could have been buying milk at a dairy, the conversation was so matter-of-fact. Later, I realised this was the place Jerry Lee Lewis sang lasciviously about in ‘Rockin’ My Life Away’. He and his cousin Jimmy Swaggart grew up across the river in Ferriday, Louisiana. It was a sad, sleazy dive, but it seemed more like real life in notorious Natchez (“a moral sty” – Twain) than the antique-stuffed mansions pretending to forget the past. 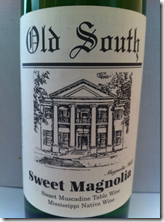 It was time for a drink, so Rhonda took us to the Old South Winery which produces Muscadine wines. The vintner, Scott Galbreath, is a retired vet and quite a raconteur. His wines were sweet and very grapey, almost like fortified Kool-Aid, and have names like “Sweet Magnolia”, “Southern Belle” and “Blue Bayou”.

“No use calling ’em Cab’nay S’vinyin,” he said. “You gotta give ’em names the good ole boys can pronounce.”

The meal at Walnut Hills restaurant, Vicksburg, was one of the best I’ve ever experienced, not only because the quality seesawed during the months in the US according to budget and generosity of friends. It wasn’t because it was fine dining, it was family dining, done at its finest. Luckily the establishment still survives, 24 years on. Until I find my own photos, I have borrowed the mansion photos from an excellent blog, Our Mississippi Vacation, which covers much the same itinerary, only by car. Tragically, exactly a year after Arky and I visited Nellie’s to buy her famous T-Shirts, the much loved madame was viciously murdered by a drunk student she had turned away. For a black woman to run such a business for 60 years, right through segregation and out the other side, gives an indication how highly she was regarded in the community.

Little Brother Montgomery’s signature tune is where I first got to hear about Vicksburg; legendary Chess songwriter and bassist Willie Dixon was born there in 1915, so let’s shout out to him, also.

A former tour-guide of Southern plantations recently told of her experience dealing with tourists oblivious or in denial: "I used to lead tours at a plantation. You won’t believe the questions I got about slavery."