Part three of a six-part series. Part one. Part Two.

Seeing the Mississippi River for the first time is not the religious experience you might expect. In a bestselling guidebook for river traders published in 1814, Zadok Cramer wrote: “To a stranger, the first view of the Mississippi conveys not that idea of grandeur which he may have pictured to himself: his first judgment will rest upon the appearance of its breadth, in which respect it is inferior to many rivers of much less note.”

Cramer wrote those words three years after the first steamboat had been built; I was contemplating them from my cabin in the last. “Someday,” predicted Mark Twain, “they’ll build the biggest steamboat the world has ever known, and she’ll be long, white and gleaming in the sunshine, with her twin black stacks. And that one shall be the Queen of the Mississippi.” 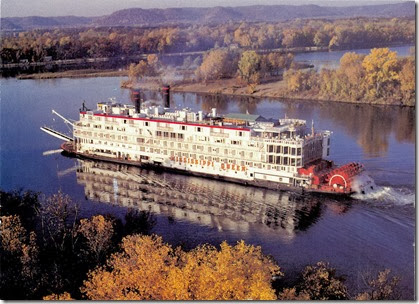 The Mississippi Queen became a reality in 1976. It is the largest steamboat ever built and, with the Delta Queen (built 1926), is one of the last two overnight paddle steamers to ply the Mississippi. Built at a cost of US $27 million, and designed by the same person as the QE2, the Mississippi Queen is certainly luxurious: a floating hotel for 400 guests. I couldn’t believe my luck to be one of them.

It happened like this. Shortly after canoeing down the Wanganui River – New Zealand’s Mississippi equivalent, in legend and commerce – I had read Old Glory, Jonathan Raban’s eloquent account of his trip down the Mississippi in a small boat. A month later I was in New Orleans, at the start of a backpacking trip around the States, and asked Ben Sandmel, a local writer, musician and folklorist, if he knew anyone – an old pilot, maybe – I could interview for a story about the Mississippi.

“Give this company a ring,” he had said. “They run cruises down the Mississippi on paddle steamers.” When I rang the Delta Queen Steamboat Company, a voice said, “Sure. What part of the river do you want to go on?”

The same day, an itinerary arrived by courier. The accompanying letter read: “Your coming from one of the great maritime nations of the world gives me no surprise that you would be interested in writing a story about America’s only two overnight paddlewheel passenger steamboats.”

Finally, after four months of sleeping on people’s floors and in crowded, often squalid hostels, I was on the Mississippi Queen about to cruise from Memphis to New Orleans. Although only 400 miles as the crow flies, with all the twists in the river, plus stopovers in historic towns like Vicksburg, Natchez and Baton Rouge, the journey would take a week.

However, it would include none of the hardships encountered by Hernando de Soto, the Spanish conquistador who in 1541 became the first European to see the Mississippi. On the Mississippi Queen’s top deck, beside the twin smoke stacks and calliope steam organ, was a jacuzzi; on the bottom was a movie theatre. In between were bars, a ballroom, dining room, library, gymnasium and sauna. The seven decks were trimmed with New Orleans-style wrought-iron railings, and linked by a grand staircase with brass bannisters. At the stern was the bright red steam-powered paddlewheel, 12 metres wide. 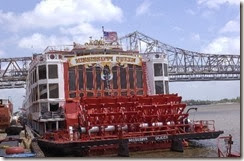 My cabin had twin beds, wide windows, its own bathroom and a private veranda. I unpacked the library I’d bought for the journey in Burke’s, the great Memphis second-hand bookshop. Inevitably, Mark Twain’s The Adventures of Huckleberry Finn and Life on the Mississippi; Raban’s Old Glory; the Penguin collections Stories of the Modern South, with work by Faulkner, Agee, Welty, O’Connor, McCullers, Capote; Bruce Catton’s Short History of the Civil War, and the just-published Encyclopedia of Southern Culture, a magnificent, all-encompassing work the size of a family Bible.

I flicked on the radio, and heard Dwight Yoakam singing ‘South of Cincinnati’: “If you ever get south of the Mason and Dixon ...” Opening Life on the Mississippi, I read Twain’s introduction: “The Mississippi is well worth reading about. It is not a commonplace river, but on the contrary is in all ways remarkable. “

The place for river-buffs was at the bow of the boat, in the passenger wheelhouse. Situated just beneath the pilot house, it was a haven for Walter Mitty boatmen, with a ship’s wheel, navigating instruments and detailed charts from which to follow the boat’s journey down the river, mile by mile.

In the pilot house above sat Captain Lawrence Keeton, a Mississippi boatman with 55 years’ experience. “I was a Huckleberry Finn guy, myself,” he said in a relaxed Southern drawl. “I grew up in Memphis, above the river, and it was my big playground. My mother would say ‘Don’t go down to the river,’ but I always did. Where we put in at Memphis was where I learnt to swim. We dug up an old rowboat there, went fishing, fooled around, like kids do.”

Piloting is just like it’s always been, though there are more navigational aids now: channel lights, buoys (boo-oys), radar. When Keeton first started, there was no radar and only “dot-dash” radio. “You used natural things to help you. You’d look out for big rocks, or a special tree at the head of a bend. During World War Two there was so much traffic, they started boo-oying the river. Now it’s like a picket fence.”

A lot of engineering work has been done this century to keep the Mississippi navigable. Dykes and wire-mesh coverings protect the banks from erosion. “There’s always something washing away. The dykes keep the river from being wide and shallow.” On the banks of the river there are markings to show the water level. “If you get aground on a low river, you’re in trouble. A towboat with barges can get caught for two months. And you’re paid by the mile. But if you get a running start, your barges can drag your boat over. So a lot of it’s like it used to be.

“Sometimes people say they’ve taken all the fun out of it. But no, there’s still plenty of fun, even with all the books and notes. But time is money. If you’re doing five miles-per-hour rather than three-and-a-half, you’re using less fuel and doing more miles – so the companies encourage speed.

“Mark Twain had a reason to race – to make time and deliver cargo. They raced to get their cargo. The cotton and the passengers were all lined up, waiting. That caused a lot of boats to burn up. Sparks would blow out of the stacks onto the cotton, and there’d be a fire.”

Even today, with steel construction, fires occur. “Some of the towboats burn up. Their windows all pop out, and bulkheads warp. Just because they’re steel doesn’t mean they can’t burn. We’re very conscious of fire.”

The pilot house is now high tech. Radar scans the river for foreign objects, a depth sounder sets off an alarm if the river gets shallower than eight feet; a radio is tuned to the Coast Guard for weather warnings and three-day forecasts from “river sages”. When Keeton first became a pilot, “We didn’t want to fool with the radios. Now you can’t get the guys off them. People help each other out here. The pilot who last went around the bend is in the best position to warn you.”

Keeton preferred the Mississippi to the Cinncinati or Ohio rivers. “Too many locks up there. Here, it’s all open – the way I like it.”

Rolling down the river is a mixture of freedom and familiarity. “It gets to be like walking through your house in the dark. You know where everything is.”

Sadly, after several owners, the Delta Queen Steamboat Company is no more, and neither is the Mississippi Queen. It was taken out of service in 2008, after 32 years on the river, and broken down for scrap in 2011. Thanks to Ben Sandmel, who is collecting awards for his recent biography of Ernie K-Doe.